Scotlink/A look at the Lesser Sandeel

A look at the Lesser Sandeel 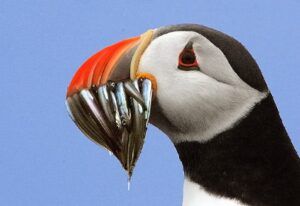 It can be difficult to appreciate the importance of the sandeel to the wider marine ecosystem. This isn’t a showy fish, it’s small (only about 15cm), silver-grey coloured and spends large parts of its life out of sight in a burrow. Although widespread in Scotland they are restricted to particular marine sandy habitats. They sit in the middle of the food chain, they feed on plankton and are themselves eaten by a large array of marine life from whales to seabirds, fish to seals. It is because so many marine animals rely on sandeels for food that they are so important for Scotland’s marine environment.

Sandeels remain in their burrows in the top 4cm of the sediment right through September till March only emerging to spawn between December and January. Throughout this period they do not eat. From April to the following September they leave their burrows in the daytime to feed on plankton. Adult sandeels (they can live for 10 years) are very sedentary never moving far from their burrows. Each female sandeel can lay between 3,000 and 15,000 eggs, which hatch into small fry. These “baby fish” are then swept away by the currents to new areas where they will look for suitable habitat to call home. It’s not easy being a sandeel, although you begin with lots of brothers and sisters, very few of them survive!

Because sandeels are such an important food source for many marine species any declines in their numbers can have huge impacts on the rest of the food chain. Although fishing directly for sandeels in Scotland currently happens at a very small scale they are very vulnerable to the effects of warming waters due to climate change. This is because it appears to be disrupting the timings when plankton is available to the fish to feed on and it is also changing the composition of species found in the plankton. Warm water planktonic species, which are less nutritious and abundant at different times of the year, are replacing cold water species which the sandeels relied on to build up the energy they required for their six month fast.

Research [1] has shown that a reduction in sandeels leads to a reduction in the productivity of some seabirds such as kittiwakes and indeed there have been enormous declines in kittiwakes (>90%) in some large colonies in the Northern Isles. Although climate change is a complicated issue to address, that does not mean there is nothing we can do. By designating three nature conservation Marine Protected Areas (Mousa to Boddam ncMPA, Turbot Bank ncMPA & North West Orkney ncMPA) and by creating a large no take zone for sandeels along much of the east coast, Scotland has shown leadership on this issue. Now it is important that these sites are appropriately managed for sandeels so that they are not affected by activities such as developments of off-shore windfarms on their sandy habitats or impacted unintentionally by fishing activities such as dredging. A fourth site identified as important for sandeels in North East Lewis should also be brought forward for designation as soon as possible.