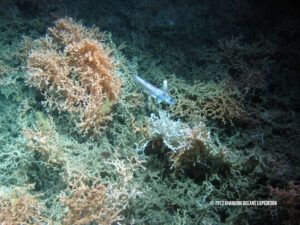 As North Atlantic coral populations are under threat from climate change, mountains beneath the sea, or “seamounts”, could hold the key to maintaining ecological links between them…. Read our guest blog by researcher Alan Fox delving into the deep and explaining why MPA networks need to account for a changing climate.

Marine Protected Areas (MPAs) do not exist in isolation. To work as intended, they need to be part of interconnected, or coherent, networks, designed to maintain connectivity between populations of marine species by supporting the movement of migratory species, larval life stages, or simply the circulation of energy and elements across sites.

In 2010 the Convention on Biological Diversity (CBD) set out a global strategic plan to establish well-connected systems of MPAs covering at least 10% of the ocean by 2020[1]. Progress is being made in Scotland through the designation of a suite of area-based protection measures. This includes the designation of 30 MPAs and 47 Special Areas of Conservation (SACs), of which 13 MPAs and 11 SACs are in offshore waters (beyond 12nm). However, we need to make sure there is a clear link between the location and management measures of MPAs and the location and health of offshore habitats.

A key requirement for establishing a well-connected MPA network is that the formation of the protected areas re-establishes or maintains connectivity of species, habitats, ecological processes and ecosystem services. However, the nature and dynamics of ecosystem connectivity in the oceans are poorly understood, particularly in the deep sea.

Additionally, the world’s oceans are undergoing unprecedented rates of ocean warming, acidification and localized deoxygenation, alongside natural cycles of change in circulation patterns. The associated changes in water temperatures, food supply, mortality rates and the strength of ocean currents can influence larval transport, physiology and ecology. Yet these variations are rarely accounted for, requiring close scrutiny of the robustness of MPA network design to changing climate dynamics.

A recent study I was involved in with researchers from the University of Edinburgh and Heriot-Watt University aimed to understand the influence of climate variability on MPA connectivity. The study analysed the connectivity of recently established offshore MPAs as part of the developing Scottish MPA designed to protect cold water coral ecosystems around Scotland.

The research focused on Lophelia pertusa – a cold-water coral which grows in the deep waters throughout the North Atlantic Ocean. Coral habitat allows diverse forms of marine life to thrive – thousands of individual coral polyps (tiny animals related to anemones and jellyfish) can live together in large coral colonies, forming elaborate reef frameworks, providing protection from predators to other species, including fish, whilst also providing safe spaces for other animals to reproduce. 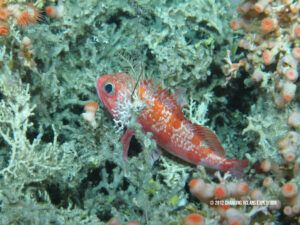 L. pertusa reefs are listed as under threat and/or decline in all OSPAR Regions, and recognised as vulnerable marine ecosystems (VME) through the Food and Agriculture Organization of the United Nations. As humans begin to explore more of the deep sea, these cold-water corals are increasingly vulnerable to damage by commercial trawling and oil and gas installations. These threats, coupled with predicted ocean acidification that undermines coral reef formation and complexity, as well as the slow recovery time of cold water coral reefs has driven the calls for the implementation of measures for their protection, including the offshore MPAs and SACs, and the recent 800m depth-ban for bottom-trawling

The study focused on eleven protected areas in Scottish waters, and one in Irish waters, with L. Pertusa reefs known to be present. 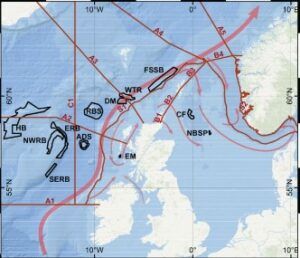 Deep-sea coral populations are linked by tiny, fragile larvae that drift on the ocean currents, travelling hundreds of miles between suitable habitats. As these larvae cannot currently be tracked in the ocean, the study used computer models to simulate 40-year runs of larval migration. The models were able to predict which cold-water coral populations were connected, which populations were isolated, and how population connectivity would be influenced by changes in climate.

Our modelling study found that network connectivity was strongly linked to changes in atmospheric circulation – where ocean currents, driven by changing wind patterns, could drive larvae away from key sites. Years with stronger winter westerlies produce a more connected network, while years with weaker winter westerly winds cause many of the links to be lost and sites become isolated – resulting in a highly fragmented network. Less well-connected networks were found to be more sensitive to climate variations, as populations became isolated and could not support one-another, making survival and recovery from physical damage, such as that caused by bottom-trawling activities, more difficult. Accordingly, a shift in average winter conditions in Western Europe which could lead to weaker westerlies, as has been predicted by climate change models, has the potential to profoundly affect the function and connectivity of the network.

Role of Seamounts in connectivity

Today, Scotland’s MPA network appears to be weakly connected in relation to vulnerable cold-water coral L. pertusa populations, making it vulnerable to the effects of climate change. Our study highlighted that the existing MPA network currently relies upon the population on Rosemary Bank Seamount MPA to provide connectivity, an undersea mountain rising almost 2000m to its summit 300m below sea level off the west coast of Scotland. As the key to network connectivity, adequate management measures that account for future climate variability are required to maintain and enhance the coral reefs on Rosemary Bank Seamount and surrounding reef sites. 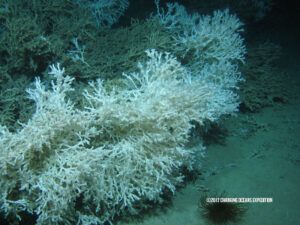 Our study further demonstrates the critical role played by seamounts and offshore banks (underwater ridges) in the wider regional ecosystem, and the need to account for the impacts of climate variation within MPA networks. Coral populations are known to thrive on the hard surfaces provided by established oil and gas platforms in the North Sea and west of Shetland. These structures may help to bridge a gap in the network between corals in the Atlantic and along the coast of Norway.

Scotland’s seamounts and underwater ridges clearly act as a stepping stone for deep-sea Atlantic coral species. The cumulative anthropogenic impacts and uncertainty surrounding future changes in ocean conditions complicate the design of MPA networks. However, with good consideration of connectivity in MPA design and effective management, these networks can be more resilient to future ocean conditions.

The research forms part of the ATLAS- EU project to improve the preservation and sustainable exploitation of Atlantic marine ecosystems. The project will explore the deep sea habitats (200-2,000m where the greatest gaps in our understanding lie and certain populations and ecosystems are under pressure. Working with researchers in Canada and the USA, the project will expand this work across the Atlantic Ocean.

With special thanks to Alan Fox for contributing this blog post.

Find out more about the Atlas project – http://www.eu-atlas.org/9-research/107-coral-connections-threatened-by-climate-change.html