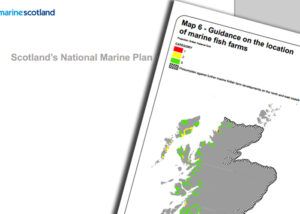 The details of a trail-blazing, high-level plan for managing Scotland’s seas have been revealed by the Scottish Government this week. Scotland’s National Marine Plan is the first ever overarching strategy for planning the wide-ranging activities in Scotland’s sea. Members of this campaign have cautiously welcomed the latest publication as a step-change for the marine environment, as it finally sets in motion a planning system for the sea, over 50 years after such a system was created for developments on land. However, we remain concerned that the Plan will be of limited use for regional and local planners until more detailed guidance is produced for coordinating different uses of the marine environment. The plan has also been faulted for setting some economic growth objectives without assessing fully their long-term environmental implications, and its limited ambition for meeting the enhancement duty of the Marine (Scotland) Act and Scotland’s emissions reduction targets. The Plan is subject to a 40 day period of review by MSPs at Holyrood.

Calum Duncan, Convenor of Scottish Environment LINK’s marine taskforce and Scotland Programme Manager, Marine Conservation Society said: “The Plan must coordinate and improve the health of our increasingly busy seas. The wider environmental conscience of Scotland plc is now growing: environmental and social needs are increasingly seen as the fundamental considerations for any development, be it installing renewable energy devices to tackle climate change, decommissioning an oil rig or changing a fish farm license. We therefore welcome the Plan’s support for achieving a just society living within the limits of the environment. However, delivery will be in the details and we remain concerned that some targets and objectives fail to fully account for impacts on sea life and marine ecosystems. Boosting the ecological health of our seas is vital to other mainstays of Scotland’s coastal economy, such as sustainable methods of fishing and marine tourism.”

Richard Luxmoore, Senior Nature Conservation Adviser, National Trust of Scotland said: “The National Marine Plan should be a long-term strategy for our seas and arguably the future of Scotland. Our seas are getting busier with every passing year and this Plan can help to ensure that developments are well-coordinated and in the long-term public interest. It’s not always popular to join up the dots, but climate change is happening and maximising recovery of Scotland’s known oil reserves is not compatible with our Government’s stated ambition to transition to a low-carbon economy.

Allan Whyte, Marine Policy Officer, RSPB Scotland said “Scotland is finally getting its house in order when it comes to the marine environment and the National Marine Plan is an important part of that. As climate change continues to drive seabird decline in Scotland, the National Marine Plan is an important tool to help mend our seas. We must do everything in our power to ensure that developments are environmentally sustainable and have as little impact on our wildlife as possible.”