Scotlink/Fostering Connection between Parliament and Nature

Fostering Connection between Parliament and Nature

“To save wildlife and wild places the traction has to come not from the regurgitation of bad-news data but from the poets, prophets, preachers, professors, and presidents who have always dared to inspire.”

Scotland currently ranks 28th from the bottom in the Biodiversity Intactness Index (RSPB & Natural History Museum, 2021). This means that nature in Scotland is more depleted than 88% of 240 countries and territories across the world. Perhaps even more bleakly, an alarming 1 in 9 species are presently at risk of extinction in Scotland.

Whilst these facts and figures importantly communicate the extent of the biodiversity crisis that Scotland currently faces, they can also make conversations around Scotland’s wildlife feel overwhelming because of the scale of the problem. The everyday experience, familiarity, and value of Scotland’s remaining extraordinary flora and fauna can get lost in these universal statistics.

For Members of the Scottish Parliament – those people who are currently tasked with leading Scotland and its natural environment towards a sustainable, thriving future – I imagine that the biodiversity crisis can also sometimes feel vast and impenetrable. Where policies are made that affect different species and habitats, the everyday impact of these decisions can perhaps feel distant from the realpolitik of Holyrood. Whilst MSPs are thoroughly interwoven with the concerns of their constituents, many of whom care and raise concerns about their surrounding natural environment, the voice of Scotland’s species and habitats can sometimes feel unheard in the decision-making process. 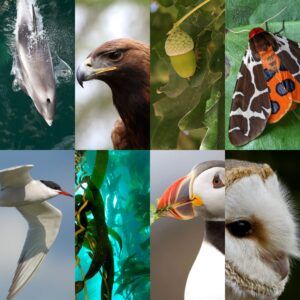 In 2013, the Scottish Government updated its strategy for the conservation and enhancement of biodiversity in Scotland, titled ‘2020 Challenge for Scotland’s Biodiversity’. One of the principle aims of this strategy was to connect people with the natural world and to involve them more in decision-making. That same year, Scottish Environment LINK and its members would echo this call back to Parliamentarians themselves through a new initiative that sought to connect and build relationships between MSPs and nature.

The Nature Champions initiative (then known as Species Champions) aimed to foster greater connection between politicians and threatened species and habitats beyond legislation. Through partnering MSPs with a particular species or habitat, the initiative hoped to ‘give a voice’ for Scotland’s wildlife in Parliament and raise awareness and promote action to restore and safeguard Scotland’s environment.

Nine years since the initiative launched, it has been hugely successful in linking MSPs with previously unknown or undervalued habitats and species. Incredibly, over 80% of MSPs were engaged in the initiative in the previous Parliament, and following significant evidence of its impact on decision-making, it has also inspired similar programmes in Wales, Northern Ireland and England.

Crucially, the relationships fostered between species and habitats and MSPs do not just include species and habitats that are already at the forefront of Scotland’s cultural identity – the golden eagles and Caledonian pine forests – but also those that quietly enrich ecosystems and their surrounding communities: the lowland raised bogs, flapper skates, flame shells and natterjack toads. The Nature Champions initiative has included many invertebrates, plants and fungi that are integral to Scotland’s iconic landscapes, but unassumingly go about their work and without fanfare when they are at risk. The Nature Champions initiative challenges this status quo and enables MSPs to develop a more nuanced view of what preserving and enhancing biodiversity really means ‘on the ground’.

Through the Nature Champions initiative, MSPs have had the opportunity to visit these extraordinary species and habitats in their own constituencies, to see them for themselves and more comprehensively grapple with the threats, community concerns and actions required to support their survival. Utilising the expert of advice of their accompanying LINK member host organisations, MSPs have been able to bring these species to the forefront of parliamentary debate to ensure that these wild things and wild places are present to inspire generations to come.

At present, there are currently 63 Nature Champions represented by MSPs in the 6th Scottish Parliament. There are still many species and habitats who desperately need championing to ensure that they are present in the minds of decision-makers as Scotland prepares for the UN’s upcoming biodiversity conference, COP15, alongside achieving the Scottish Government’s post-2020 Biodiversity Framework.

At LINK, we will continue to recruit and support cross-party MSP Nature Champions to ensure Scotland’s natural environment is preserved and enhanced going into the future. At the start of this Decade for Ecosystem Restoration, now is the time for Nature’s voice in the Scottish Parliament to be strong, loud and well informed.

You can find more about the initiative on our website, including which MSP is championing which species and habitat. You can also keep up to date with what the different Nature Champions are up to as well as learning interesting facts about Scotland’s wildlife and wild places on the Nature Champions Twitter page.

Keep an eye out for this Friday 22nd April, where the Nature Champions account will be launching its weekly #FunFactFriday awareness-raising campaign to mark Earth Day.