Scotlink/Has MPA management compromised the fate of the common skate?

Has MPA management compromised the fate of the common skate? 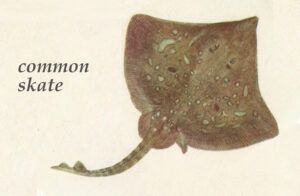 Described sometimes as the Giant Panda of the sea, the Common skate is a critically endangered species – and one of its last strongholds is in our deep sea lochs on the West coast. However, the latest Scottish Government measures introduced to protect this majestic, but sadly all-too-rare creature, whilst a major step forward, are still at risk of being jeopardised by short-termist compromise.

Some areas – once identified as potentially crucial to the recovery of the common skate – will now remain open seasonally to bottom-towed fishing. These ‘derogations’ were called for mainly by those working in the mobile sector of the fishing industry. However, they were not supported by all fishermen and commercial interests. Others – including static fishermen and scallop divers – had hoped that these areas would be included in a full ban on mobile fishing to give the seabed a chance to recover, as well as improving the commercial and recreational fishing opportunities and access. Amongst these ‘derogations,’ a small group of islands known as the Green Isles (north of Salen), which are surrounded by fragile underwater reefs, have been left open to scallop dredging and are just two kilometres outside of the zone prohibiting bottom-towed fishing – despite serious concerns expressed via public consultation.

To understand how this has happened, we’ll need to go back to the beginning.

Whilst the panda comparison is gripping, the skate is probably more like a lion. It is one of the largest skate in the world, a top predator feeding on shellfish and small fish. Large mature skate will envelop their prey with their huge wings which can grow up to 8ft in width. As the name suggest, it was also very common. There are historical records of booming skate fisheries, but populations have crashed over the past few decades and the species now has the unenviable distinction of being on the IUCN Red List of critically endangered species. 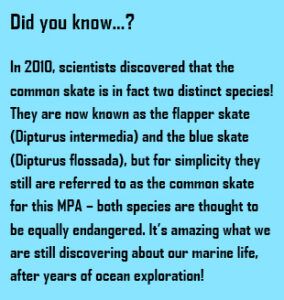 For marine biologists, it’s therefore not surprising that this fish has become emblematic within the Scottish Government’s Marine Protected Area project. Early doors it became a ‘priority marine feature’ and a ‘search feature’ which meant that the search was on for potential Marine Protected Areas to help protect it (as representative of Scotland’s broader marine fauna and flora and habitats). The tagging data collected by the Scottish Sea Angling Conservation Network’s (SSACN) Shark Tagging Programme was instrumental in determining which areas were most strategic to protect.

Whilst in international terms the fate of the common skate is a big deal, in Scotland it is broadly speaking just another one of our fish species that aren’t doing too well. Skilled and intrepid sea anglers still catch them from beaches and boats and have for years now run a catch and release scheme for conservation and research into the species. For commercial fishermen, common skate are mainly encountered as regrettable bycatch from bottom trawls. But the majority of the Scottish public have never set eyes on one, let alone know what parts of our sea they need to reproduce and flourish as a species.

And yet this is exactly what we need to do. Fortunately the science is becoming clearer. Loch Sunart to Sound of Jura is a crucial part of their range. The skate move around from the shallows to the deeps. A paper, authored by one of the Government’s leading scientists and SSACN has started to more accurately make sense of their movements and identify which habitats are important to their survival.

The proposals for management first put forward in 2014 were singularly inadequate. In fact the Loch Sunart to Sound of Jura MPA was a key trigger for our ‘Don’t Take the P’ campaign. Only approximately 14% of the site was protected from dredging and bottom-trawling. Without urgent attention, Loch Sunart to Sound of Jura was a ‘paper park’ in waiting. Fortunately the subsequent proposals announced in June 2015 were significantly better. Larger areas of the Sounds of Mull, Kerrera and Jura were to be protected from trawling and dredging. These proposals were met with a mixed reception by the fishing industry. Some fishermen – scallop divers and creelers – welcomed them. However, scallop-dredging and prawn-trawling interests lobbied hard and pushed for some significant derogations, namely shallow areas.

You can see the development of the management over the past two years: 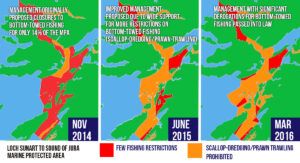 This last management regime has now been formally passed by the RACCE Committee. In January there was a concerted effort by mobile fishing interests to annul fisheries laws for South Arran MPA and 12 other sites. However, there were no such efforts to annul the Loch Sunart to Sound of Jura MPA management proposal, possibly because the mobile fishing sector had already secured these derogations.

These derogations might seem trivial, but they are not. We have two key concerns about the fisheries management for this area and we have written to the Rural Affairs, Climate Change and Environment Committee to make what we hope is viewed as a patient, but principled case:

There have been continued claims by some parts of the fishing industry in the past few months that the Scottish Government has ‘over-reached’ in its approach to managing MPAs. This is simply not the case. The process started with some very inadequate proposals for managing fisheries within inshore MPAs and these were modified following an open public consultation. We have documented our view on the complexity of views around the MPA process here.

The facts are that (i) we have a critically endangered species on our doorstep and (ii) the best scientific minds have concluded that overfishing and the habitat-modifying effects of bottom-towed fishing are inhibiting its recovery. We therefore need to introduce management that works. Rather than over-reach, we are worried that we are a witnessing a regrettable under-reach – perhaps not a paper park, but an ‘MPA without big benefits.’ We have a real concern that the full conservation and socio-economic benefits of the MPA won’t be realised or evident with such potentially crucial areas for the skate’s life history remaining seasonally open to scallop dredging. Watered down management does not strike a balance, it risks compromising the potential of the MPA project for one of the most important MPAs on the West Coast.