Life on the rocks

Hidden beneath the waves, rocky reefs are a haven for Scotland’s marine life.

Often covered in soft corals, sea fans, sea squirts and sponges, rocky reefs are hubs of activity, providing refuge for young fish and shellfish such as lobsters and crabs. 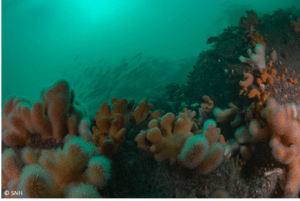 Rocky reefs are made up of bedrock or stable boulders, and cobbles that rise from the surrounding seabed to create a fascinating habitat that is then colonised by many different marine animals and plants. The variety of life found on reefs can vary depending on the type of rock, topography, and exposure to wave action and tidal streams. For example, they can range from vertical rock walls, sloping or flat rock, horizontal ledges, boulder fields or aggregations or rocks. Additionally, the combination of crevices and boulders in most reefs increases the diversity of life because of the shelter these range of habitats provide.

Rocky Reefs are important breeding, feeding and nursery sites for a range of fish and shellfish species, including crabs and lobsters. They also provide coastal protection against strong waves, by reducing the impact of waves on the shore.

The main threat to rocky reefs is physical damage from mobile fishing gear passing incidentally over the reefs when carrying out fishing activities in nearby areas. The marine life that rocky reefs support, otherwise known as their ‘characteristic species’, such as spiny lobster, are also susceptible to being caught in passing nets, such as tangle nets. Rocky reefs are often peripheral to fishing grounds, and studies have found changes in the composition and level of fauna on reefs in areas where dredging takes place[1]. Sedimentation and chemical pollution from fish farming can also cause damage to rocky reefs. Additionally, the invasion of non-native species can also bring about radical change on rocky reefs.

Rocky reefs are considered alongside living reefs (i.e. horse mussel beds) as types of  ‘Reefs’ requiring the designation of Special Areas of Conservation (SACs) for their protection under the habitats directive. These requirements include protection for species typically associated with these reefs.

In Scotland, several SACs have been designated to support healthy reefs, including:

The next step is to make sure that these sites are appropriately managed so that rocky reefs and their resident species are not affected unintentionally by bottom towed fishing and other activities.