Pink and twig-like, living maerl is a hard, coral-like seaweed that forms complex carpets on the seabed. These ‘maerl beds’ often form in shallow areas with strong currents and offer a place of shelter for many marine plants and animals such as other seaweeds, sea urchins, sea cucumbers, anemones and bivalve molluscs – some maerl beds have been found to host over 300 species of plants and animals! 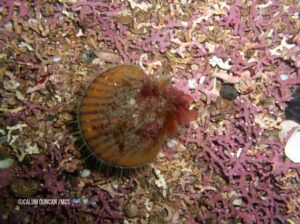 Maerl beds represent critical habitat for many commercial types of fish, including herring, and shellfish such as young scallops that are known to seek out living maerl as nursery beds and juvenile cod. For example, a recent study in the Firth of Clyde found that there were higher numbers of Cod in “ shallow, sheltered areas where the seabed was composed of gravels and pebbles that contained maerl”.

Maerl is a type of ‘coralline’ algae, depositing lime (calcium carbonate) in its cell walls as it grows. Maerl beds are therefore also an important blue carbon store, processing carbon from the atmosphere and helping mitigate the impacts of climate change.

Living maerl beds develop on top of dead white maerl gravel that has accumulated over centuries in many areas off Scotland’s west and north coasts and islands. In fact, many of the iconic beaches of western Scotland are made up of fragmented maerl crushed by wave action and bleached by the sun. Scotland also hosts what is considered to be the most extensive maerl beds in the UK – in the Sound of Barra Special Area of Conservation (SAC).

Maerl beds are fragile and slow growing, making them susceptible to the physical disturbance caused by heavy anchors, mooring chains and, particularly, heavy scallop dredging gear. Scientific research has also demonstrated that maerl is also susceptible to sedimentation of organic waste from nearby fish farm cages. Furthermore, it will likely become harder for maerl to form their lime skeletons as the ocean is becoming more acidic as a result of rising carbon dioxide levels. Maerl is also likely to be adversely affected by the temperature rises associated with climate change.

As valuable scallop and cod nurseries that also lock up carbon, protecting and recovering Scotland’s maerl beds is essential to ensuring we manage our seas wisely so that current and future generations enjoy the benefits that they provide. This ‘ecosystem engineer’ creates important habitats that are vital to the survival of other species and have a strong influence over the health and stability of the ecosystem in which they live.

Maerl beds are listed on the OSPAR list of Threatened and/or declining habitats and are a Priority Marine Feature in Scottish waters. Maerl beds are a feature of several Marine Protected Areas (MPAs), and are protected as a component of sandbank or large shallow bays habitats within Special Areas of Conservation (SACs). Unfortunately recent events in Loch Gairloch have highlighted that vulnerable habitats may be at risk even within MPAs [1], and that appropriate monitoring, compliance measures and on-the-ground survey work are essential to the success of MPAs. The following sites are examples of where statutory and voluntary management measures are in place to protect maerl within Scotland’s MPAs:

Management measures for other sites designated for maerl are expected to be brought forward in future. The Scottish Government are also looking to improve protection for maerl beds and 10 other Priority Marine Features outside of Marine Protected Areas. You can find out more about the consultation and see our response to the first stage consultation here.