Guest blogger Esther Brooker, Marine Policy Officer at WWF Scotland, dives down to uncover ocean fronts and the important role they play in our seas.

Probably the most unusual and intangible feature listed for protection within Scotland’s Marine Protected Area (MPA) network, ocean fronts are not something that make the news regularly. Yet they are a crucial component in the life cycle of countless sea creatures – without the presence of fronts, our oceans would look very different.

So what is a front?

The water in our oceans and seas is very variable. In different areas they have different characteristics, such as temperature, salinity (the level of salt dissolved in the water), and even the speed at which it flows. Where two masses of water with different characteristics meet, a ‘front’ is formed along the boundary. The front causes pressure changes to the water along this boundary, which can result in nutrients being brought up to the surface. The increased nutrients in shallower waters enriches the growth of phytoplankton (microscopic floating plants), which benefits the whole food web (see box). Fronts are often very seasonal in their presence and behaviour, and may change with different temperatures (e.g. through the summer). 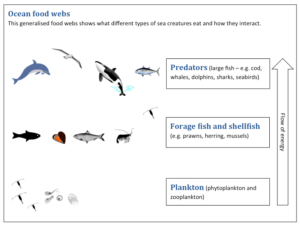 Why are they important?

Fronts often attract a diverse number of species to them because of the increased productivity and greater food supply. However, they also affect other ocean processes, from the distribution of nutrients to other areas to influencing the climate. Fronts are also important in economic terms, as these highly productive areas help to support fish stocks by providing a plentiful food source for young and adult fish alike – and seafood is Scotland’s second largest export!

How can we protect them?

The Clyde Sea Sill MPA is designated for fronts (as well as black guillemot and special types of seabed habitats). The Clyde sea front is particularly important for this area; many species of fish, birds and mammals rely on it to provide food throughout the summer breeding season. One study illustrated how basking sharks, which concentrate in high numbers in this area from July until September every year, actually follow the front as it moves during the season. It’s important that sea users, such as fishers, ships and ferries, and holiday makers are aware of these fronts and the fact that they act as a magnet to so many species. It’s not possible to completely avoid these areas, but people can act appropriately to reduce their impact on the sealife that may be found around the front. We think that fronts should be managed as a whole system within MPAs to ensure that the species that rely on it are also protected. 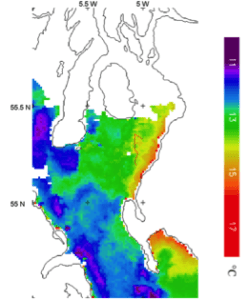 This image shows the variation in seawater temperature in the Clyde, which highlights the location of fronts – red is warmest and purple is coolest. These measurements are taken by satellites. 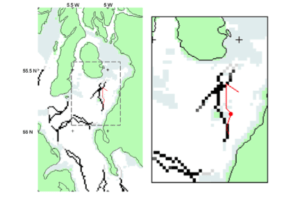 This image shows the front more clearly in black – the red line on this and the above image is the movement of a basking shark tracked over the course of a day, clearly following the edge of the front, presumably feeding on the rich plankton. This shows how important fronts are for certain species!