Scotlink/Are we nearly there yet?!

Are we nearly there yet?! 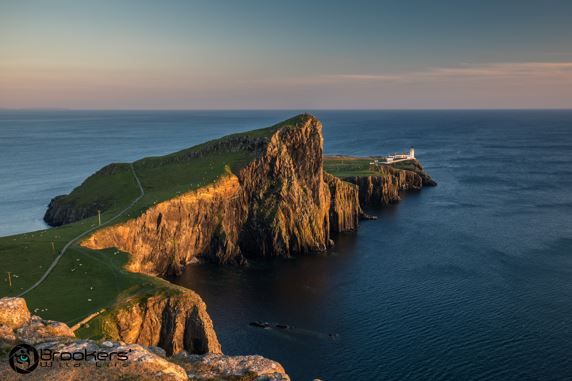 It has been 8 years since the Marine (Scotland) Act 2010 received royal assent and was adopted into Scots law. This key piece of legislation, long campaigned for by the Save Scottish Seas coalition, and other environmental and community organisations, represented significant reform for the way marine conservation is carried out in Scotland. Crucially, it gives additional powers to protect and enhance our unique marine natural heritage through new instruments, including marine protected areas (MPAs) and marine spatial plans.

And not a moment too soon! Due to increasing human pressure Scotland’s seas are in a degraded condition, with many species declining on a regional and national level, and complex seabed habitats reduced to a shadow of their former extent. MPAs, along with wider seas measures such as marine planning and modernised fisheries management, can offer a vital lifeline to many species and habitats that need to be protected and recovered to restore Scotland’s ecosystems to a better state.

2018 is a year for reflecting on progress. The first review of the National Marine Plan was published in March, and shortly the Scottish Government will issue a report on the development of the MPA network. We’ve taken the opportunity to step back and take stock of Scotland’s MPA journey so far, share a few reflections and look ahead at how far we still have to go…

A lot has happened since 2010, although Scotland’s MPA journey started decades ago with the establishment of St Abbs and Eyemouth Voluntary Marine Reserve in 1984. A number of inshore and offshore Special Areas of Conservation (SACs) and Special Protection Areas (SPAs) were also established under EU law, but these largely lacked statutory management measures, rendering them open to criticism of being ‘paper parks’. The drive to see the bigger picture, to create a well-managed MPA network that was greater than the sum of its parts, culminated in the successful environmental charities’ push for integrated UK, Scottish and Northern Irish Marine Acts, with the UK Act delivering measures for Wales, England and offshore waters. To read in detail about the full Scottish MPA network process, and other aspects of the implementation of the Marine (Scotland) Act 2010, check out our ‘Running History of MPAs in Scotland’. For a briefer overview since 2010, the illustration below highlights the key stages in this process. 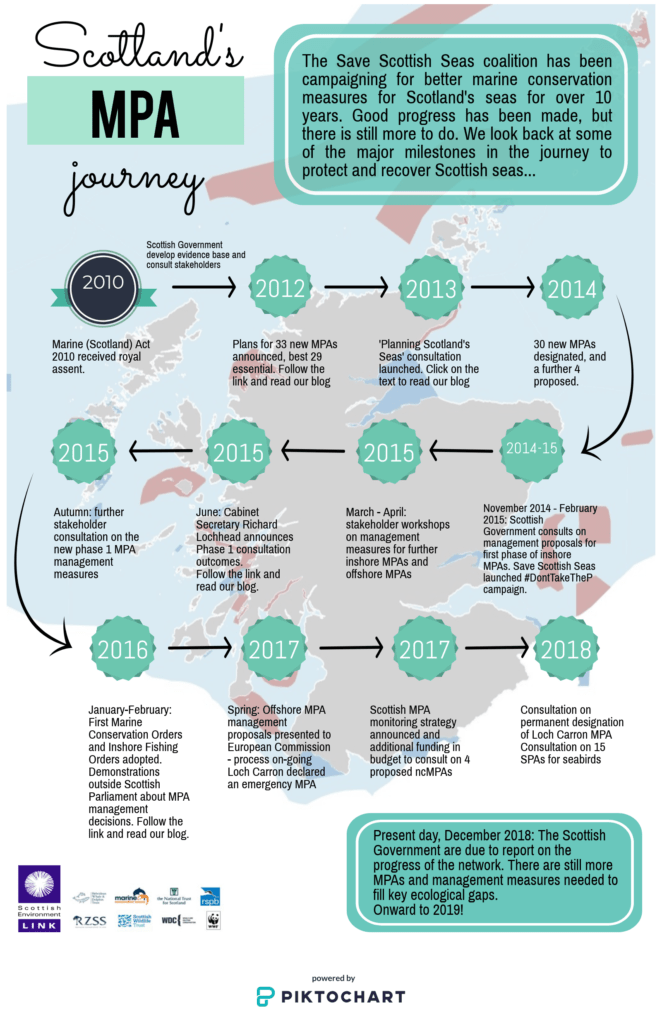 We’re now four years on from the designation of 30 nature conservation MPAs, and the first phase of management measures in inshore MPAs and SACs have been in place since 2016. What we’re really itching to know is: are these measures working?! Unfortunately this is difficult to answer so early on – many of the species and habitats that are protected under these initial measures are slow growing (e.g. maerl) or slow to reproduce (e.g. common skate), so it could be years – even decades – before recovery can be scientifically verified. What’s more, underwater surveys and monitoring is challenging and expensive, and the Scottish Government’s science and conservation bodies lack the funding that would be needed to comprehensively monitor and regularly assess ecological change.

However, we are starting to see positive outcomes in small areas that have had longer-term restrictions on activities such as bottom-towed fishing. North Lamlash Bay, Scotland’s first ‘no-take zone’ campaigned for and curated by the Community of Arran Seabed Trust (COAST), has just celebrated its 10-year anniversary, and survey reports indicate clear recovery of biodiversity. Anecdotal reports also indicate that the  Firth of Lorn, an SAC to protect reef habitat on the west coast that forms part of the more recently designated Loch Sunart to the Sound of Jura MPA, is  showing recovery of seabed habitats since scallop dredging was prohibited in 2006. So we can be hopeful that we will see positive change within some of our MPAs in the coming years, but there’s still a long way to go before we can definitively say that Scotland has a complete MPA network.

A big gap in the network is MPAs for highly mobile and migratory species. The large Inner Hebrides and the Minches SAC was designated in 2016 for harbour porpoises, and a suite of  marine bird SPAs is planned. Four MPAs were proposed back in 2014 for minke whale, basking shark, Risso’s dolphin, sandeels and some sensitive seabed habitats, including sea fan and sponge communities, and geological features. Risso’s dolphin occur all year round and there is a resident population off northeast Lewis, monitored annually by one of our members Whale and Dolphin Conservation. Minke whales and basking sharks are mainly summer visitors and are often seen off the coast, with west coast sightings of both species collated by the Hebridean Whale and Dolphin Trust and of basking sharks Scotland and UK-wide by the Marine Conservation Society. Did you see the incredible footage of tagged basking sharks taken by scientists earlier in the year? At the end of 2014 SNH recommended these sites go forward to consultation, but they were overtaken by other priority areas for conservation. With additional funding secured in the Scottish Government’s 2018 budget to expedite these sites, we hope they are very much back on the agenda and look forward to engaging in that process early in the new year. We’ll let you know when.

Despite good progress in 2015 with the first phase of inshore MPA management measures, many MPAs still lack formal protection from unsustainable or unmanaged activities. Management measures are still needed for the remaining inshore MPAs and SACs and proposals for Scotland’s offshore MPAs are still being processed by the European Commission and Member States. It’s difficult to say at what point the MPA network might be complete – this will depend on improved monitoring (including for data deficient Priority Marine Features), adequate management and effective compliance measures. The environmental goalposts are constantly moving, with the effects of climate change intensifying, human development at sea increasing and so much uncertainty surrounding the future relationship of Scotland and the UK with the European Union. We will be keeping our fingers (and fins) crossed for a brighter future for our marine biodiversity as we continue on the road to a well-managed MPA network.