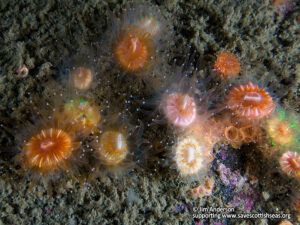 Caryophylilia smithii – how does this feature relate to protection of MPAs?

In August, Glasgow hosted the International Marine Conservation Congress. This was a big deal. Over an intense week, the world’s most creative and motivated minds in marine science gathered together to discuss solutions to the urgent problems facing our shared ocean. It was also – in domestic terms – very timely. Here in Scotland, we have just put in place 30 new Marine Protected Areas; countries all across the globe are beginning to develop MPAs. The eyes of the world’s marine conservation and planning community were on Scotland’s contribution to the debate. So what did they think? The opinion-soup of social media is an imperfect tool for monitoring such things, but well… so are feedback forms, so here’s some snippets:

Scotland has a large network of paper parks. The challenge is to turn them into real protected areas – Baxter #IMCC3 — Callum Roberts (@Prof_CallumYork) August 15, 2014

Elliot Norse, if Scotland bans Bottom trawling, England would ban it too, and the EU might follow the ban, this could be huge! #IMCC3 — Abel Valdivia (@AbelValdivia) August 18, 2014

Marine protected AREAS. Not marine protected FEATURES. We obsess about tiny bits of evidence in the UK. To our loss. #IMCC3. — Jean-Luc Solandt (@JeanLucSol) August 18, 2014

This last issue is of utmost significance and one that looks set to dog the Scottish MPA process. Site protection or feature protection could mean very different things for the future health of our seas. At worst, feature protection would take an extremely narrow approach to ecological recovery in our marine environment. At its best, site-wide protection could start proving just how effective well-managed MPAs can be – for everybody.

Let’s review how we got here: over the past 3 years we have engaged in a Scottish Government-led process to develop MPAs in Scotland. (for a longer timeline, see: A running history of MPAs in Scotland). This process has been largely acknowledged to have been well-handled, participatory and inclusive. It has specifically allowed for 3rd party proposals for MPAs to be developed by communities (COAST put forward the South Arran MPA; Gairloch and Wester Loch Ewe put forward the Wester Ross MPA; MCS put forward Loch Fyne and Loch Sween; and National Trust for Scotland put forward Lochs Duich, Long and Alsh); Marine Scotland (the government department leading on the process) broadened its stakeholder list to allow more people to be involved in workshops following feedback along the way, and it has harnessed the expertise of SNH and JNCC (statutory nature conservation advisors) to help develop science-based recommendations for the Scottish Parliament to consider. Truly, some might say, science and policy engagement in action. A very difficult thing to achieve.

The process has been complicated, but somewhere along the way, the process has narrowed its focus to feature conservation rather than site conservation. To start with, statutory nature conservation advisors identified areas in Scotland which are “least damaged more natural” to single out for protection those areas where the quickest conservation ‘gains’ could be made, ie banking the healthiest areas of our sea. “Site selection guidelines” and a list of “MPA Search Features” were then drawn up to guide the development of MPA proposals – both inside those ‘least damaged more natural’ areas of Scotland’s seas and outside of them, where necessary. Bear with us here, because there’s more. The MPA Search Features were a sub-list of features (from a longer Government list of “Priority Marine Features”). These MPA Search Features were features deemed to be most appropriately protected (and hopefully recovered) by MPAs, rather than by other management (such as wider seas measures, eg a ban on the discharge of a particular chemical, or the phasing out of a particular type of fishing gear).

In short the technical application of the MPA guidelines has established a process that looked at setting feature conservation objectives largely in isolation of wider site objectives. This is a subtle shift, but with not so subtle consequences. The MPA Search Features were never explicitly intended to be the sole target of MPA protection. In the site selection guidelines, it was clear that “other features which would benefit from site-based protection measures and which need to be represented within the network to deliver coherence may be included” in the network. However, out of the 30 MPAs recently designated, there are 44 protected ‘features’ and 34 of them are “MPA Search Features”. In other words, only 10 features have been added to the abbreviated feature list – which was only ever really intended as a streamlined way to start identifying sites which of course contained complex habitats supporting thousands upon thousands of marine species.

So, the first point to note: the ‘feature’ approach has already arguably narrowed the strategic focus of MPA protection. But the most significant implications of this approach are for management. With site protection, planning authorities and relevant agencies are required to consider the conservation objectives of the whole site. With feature protection, only the protection of that feature is considered. It means that the focus is on the feature, its current health and distribution, not the wider health of the marine area around it. It encourages a ‘freezeframe’ approach to marine ecosystem management. In other words: ‘this is what we’ve got. Let’s keep it the way it is.’

There is of course a logic to the feature protection, as it provides a very clear – and crucially more easily monitored – way to assess whether your MPA is working. The distribution of a single species or habitat can be surveyed, whereas the wider health of the marine ecosystem within a site is less easy to accurately measure. But unfortunately it is potentially a chronic case of “not seeing the wood for the trees.” (in marine terms, perhaps, “not seeing the reef for the flameshell” – that is so very unlikely to catch on…). By focussing narrowly on the health – or otherwise – of a particular feature – be it a white cluster anemone or a localised aggregation of deep sea sponges – it means, we have started creating sites within sites. The emerging patch management of the Small Isles MPA illustrates this issue worryingly well:

The freezeframe feature conservation approach means the potential to recover the extent of a mosaic of habitats on the seabed – which may have covered a much larger area before, say, dredging occurred in the area – could be constrained by patch management, where damaging activities are kept off sub-features of that mosaic, but very little else in the MPA. It also means that whilst management is directed at that particular feature, there may be other species and habitats which are not receiving the consequential protection that they would have received if the whole “site” was being managed with broader conservation in mind.

This issue – as many will know – has been playing out for some time in legal discussions around the management of European Marine Sites (EMS), such as SACs and Natura 2000 sites. Here, there is a clear legal basis for ‘site integrity’ (ie Article 6(3) of the Habitats Directive) and legal discussions are now ongoing about how site integrity can be delivered. Our members are pursuing the concept to deliver holistic cross-site management that supports wider ecosystem processes and the inter-relationships between the protected features and other features within the site, rather than the features in isolation. In other words, to ensure that conservation is more than just the ‘favourable status’ of a single designated feature. The MCS/Client Earth briefing on the what is known as the CJEU’s Sweetman ruling provides an excellent analysis.

There is no such explicit reference to ‘site integrity’ for the latest tranches of nature conservation MPAs in England and Scotland. Academics like Peter Jones are arguing that for the English MCZs, the conservation objectives are for the MCZ (ie the full site) – see his presentation at the recent Marine & Coastal Policy Forum (pg 19). For the new Scottish MPAs, the Marine (Scotland) Act makes exactly the same provision in section 68(3), referring to the conservation objectives of the MPA:

Fortunately in the Marine (Scotland) Act there is a provision which enables a broader approach, where public authority duties also apply to: “any ecological or geomorphological process on which the conservation of any protected feature in a Nature Conservation MPA … is (wholly or in part) dependent.”

This is a crucial statement. It is the view of this campaign, that site conservation objectives need to be kept firmly in view. In practicality what this means is that:

We know MPAs can work. And we know that giving strategic areas of the sea a rest from damaging activities will benefit everyone in the long run. Unfortunately we do not have the luxury of time to get this right second or third time. Our seas need urgent recovery. So we cannot blame the tool of MPAs if we see continued environmental decline in 10 years time. The success of the MPA project will depend on how we use MPAs as a tool for change.