In June, the Animals and Wildlife (Penalties, Protections and Powers) (Scotland) Bill was passed by the Scottish Parliament. The bill will increase the maximum penalty for the most serious animal and wildlife crimes to five years’ imprisonment and an unlimited fine and was supported by LINK members. We were delighted to see a number of MSP Species Champions from across the political spectrum seize the opportunity in the final debate on the Bill to bring forward several amendments to improve protections for Scotland’s animals and wildlife. This was a fantastic example of highlighting how MSPs can stand up for their species in their Parliamentary work and secure stronger protections that will allow them to thrive in future.

In the words of Minister for the Environment and Rural Affairs, Mairi Gougeon, Species Champion for hen harrier “If anything can be taken from the debate, it is the passion and strength of feeling that members across the chamber have for animal welfare and our wildlife, and the seriousness with which we treat those issues not just here in Parliament but more widely in Scotland”. With 1 in 9 species at risk of extinction in Scotland, we need a strategic approach to protect our environment and ensure that our nature is healthy and thriving for future generations.

Alison Johnstone MSP, Species Champion for hare, lodged an amendment which the Scottish Government agreed to back. The amendment makes mountain hares a protected species, effectively ending managed control on grouse moors. Alison Johnstone stated ‘Amendment 30 seeks to protect the iconic mountain hare and to preserve the species, which is in decline. A major academic paper that was published in August 2018 found that mountain hare populations on some grouse moors in the north-east Highlands had declined by 99 per cent since the 1950s’. Newly published data by the EU shows a massive decline in mountain hare populations in Scotland. The report, based on Scottish Natural Heritage’s data, has led to the mountain hare’s status to be downgraded to unfavourable, meaning that special conservation action needs to be taken to arrest further declines. Alison Johnstone has epitomised the spirit of the Species Champion role through her determined and dedicated work to gain more protection to mountain hares. Her colleague, Mark Ruskell MSP, supports Alison Johnstone’s commitment by stating ‘Many of us in the chamber are species champions, but I have seen no one more determined and driven to protect her species than Alison Johnstone’.

Colin Smyth MSP, Species Champion for the badger, tirelessly and patiently lodged a number of amendments to help prevent badger suffering in the Animals and Wildlife Bill. Vicarious liability will now be extended to offences involving traps and snares, allowing landowners and managers to be prosecuted in addition to the individual trap operator. Furthermore, Claudia Beamish MSP, Species Champion for forester moth, lodged an amendment to increase penalties for the destruction of badger’s nesting and resting places. Claudia Beamish stated ‘I am quite clear that the destruction of setts is as serious as killing or injuring a badger in terms of the damage that is caused’. 50% of badger crimes are the failure to apply for a licence for allowed badger disturbance. The bill now recognises that penalties for sett offences are on a par with offences directly against badgers. Sett and badger offences will now carry 5 years in prison or an unlimited fine or both when tried by solemn procedure, and 12 months or a £40,000 fine or both when tried by summary procedure. Species Champions Colin Smyth, Mark Ruskell and Claudia Beamish worked closely with Scottish Badgers in presenting amendments which ensure the protections of badgers. Colin Smyth complimented the work of LINK member, Scottish Badgers, for their ‘outstanding work to promote the study, conservation and protection of Scotland’s badgers’.

Documents obtained under freedom of information law show that Scottish National Heritage have been advocating for fish farms around the coast to reduce and phase out the use of “acoustic deterrent devices” (ADDs), to protect marine mammals. Gillian Martin MSP declared ‘…as the grey seal champion, I am delighted that seals cannot be shot any more, even if that measure came in at the last minute’. Although preventing the salmon farms from shooting seals is a very positive step, there are concerns around alternative methods of deterring seals that may also have negative welfare impacts. Recognising this, Mark Ruskell MSP, Species Champion for white tailed eagle, tabled an amendment requiring the Scottish Government to review the use of ADDs and produce a report by March 2021. This amendment was agreed to. These devices emit noises that deter seals, but they are known to be harmful to other marine animals including whales and dolphins.

However, an amendment tabled by Mark Ruskell seeking to ban the shooting of beavers unless they were in favourable conservation status was voted down. The beaver is the first mammal to be reintroduced to the UK and is classified on the IUCN red list as endangered. Mairi Gougeon concluded the discussion on beaver protection by stating ‘I hope to see the beaver population start to expand away from high-conflict areas and into suitable habitats where they can thrive and where we can all see the positive benefits that those remarkable eco-engineers can bring’. 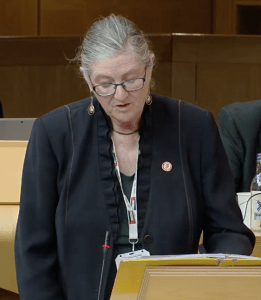 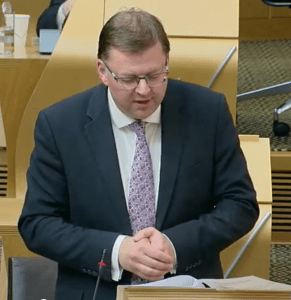 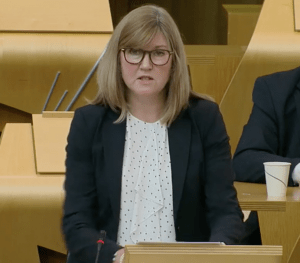 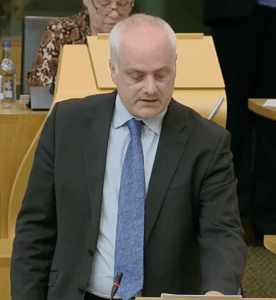