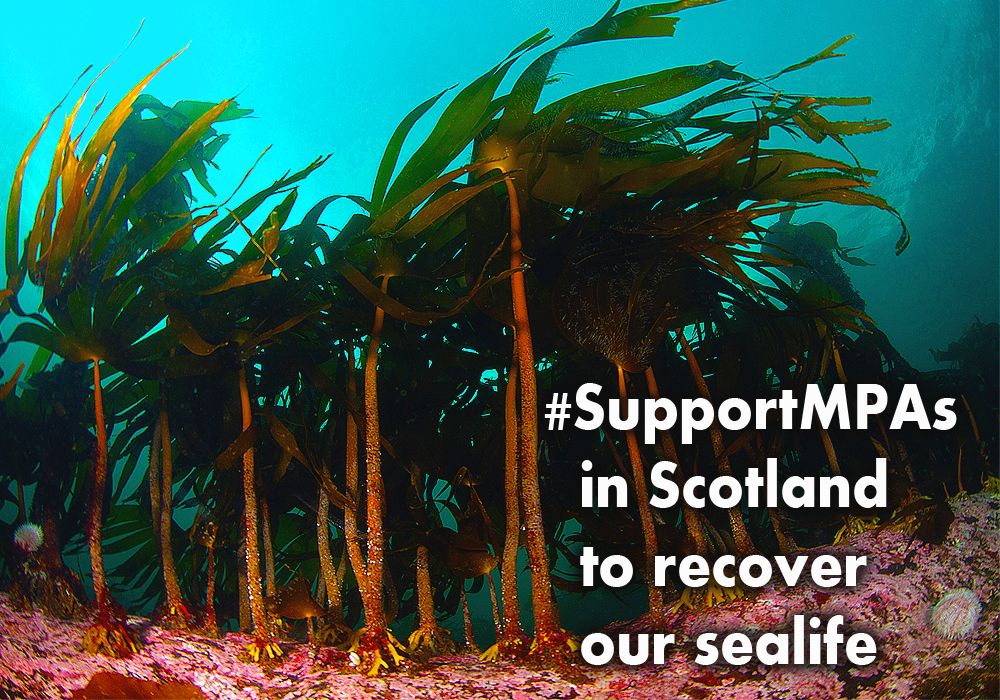 This summer, the Scottish Government will set up as many as 33 new nature conservation Marine Protected Areas (MPAs) in Scotland’s seas. This is a watershed moment for our seas, which have been damaged by decades of unsustainable use. Over 10,000 people voiced their support for MPAs during the Scottish consultation in 2013. The politicians are now deciding what MPAs to designate – so this is a crucial time to remember why we need MPAs.

For the months of June and July we will be highlighting each of the proposed MPAs with a few vital facts about each MPA – an online summer study in marine conservation! If you support MPAs, share this around via Facebook and Twitter.

The detail: why we support 29 MPAs

The proposed network of nature conservation Marine Protected Areas (MPAs) includes 33 possible sites around Scotland’s coast in both inshore and offshore waters. It’s worth highlighting that some of these sites are alternatives to each other – in other words Marine Scotland has presented choices between different combinations of sites to achieve the aims of the MPA network.

Via our response to a public consultation, the eight members of Scottish Environment LINK’s marine taskforce, urged that 29 of these sites are designated as MPAs in line with the advice of Scottish Natural Heritage (SNH) and the Joint Nature Conservation Committee (JNCC). Put simply, we do not consider that the ‘science-based alternatives‘ put forward in the consultation will protect the most important sites for biodiversity and the ecosystem health of Scotland’s seas.

The SNH and JNCC advice to Government stated that “as a result of concern from the renewables [and fishing] sector, Marine Scotland requested that JNCC identify science-based alternatives for the representation of those features for which the Firth of Forth Banks Complex [and Central Fladen] are being considered.”  JNCC failed to identify ecologically equivalent alternatives and have therefore presented substitute areas as ‘science-based alternatives’. In the light of this advice we are disappointed that these are considered in the consultation as substitutes of equal value. This is not only our view; the SNH and JNCC advice itself states “JNCC concluded from assessment of the evidence that [the science-based alternatives] do not make equivalent contributions to the network to that made by the Firth of Forth Banks Complex.” Our position does, however, differ from that of JNCC on the Fladen grounds because as, we explain below, only Central Fladen provides a significant opportunity for the expansion and recovery of an important and sadly threatened feature (the Tall seapen); the ‘science-based alternatives’ do not offer such scope – or hope – for recovery.

Firth of Forth Banks
Scottish Environment LINK members believe that it is essential for the coherence of the network that Firth of Forth Banks Complex is designated a nature conservation Marine Protected Area. This possible Marine Protected Area (pMPA) represents a more diverse habitat mosaic and wider range of constituent marine species compared to the alternative pMPA options presented (Turbot bank and Norwegian Boundary Sedimentary Plain). The geographic location, and local physico-chemical drivers of the Firth of Forth Banks Complex have also led to the evolution of an ecosystem that is not replicated by the alternative pMPA options.  The pMPA contains significant ocean quahog aggregations and offshore subtidal sands and gravels PMFs. The resident sandeel population Priority Marine Feature (PMF) is a central component to the ecosystem function and trophic food chain of the area and requires high levels of protection and must be added to the list of protected species. The area is also particularly important for seabirds and seals, which have been locally in decline for the last 10 years. Whales and dolphins are also users of the area.

Central Fladen
Scottish Environment LINK members also support the designation of the Cental Fladen (core) and Central Fladen pMPAs. The boundary of this pMPA offers best opportunity for the protection, and possible expansion, of the Burrowed mud and the associated tall seapen (Funiculina quadrangularis) Priority Marine Feature population. The adjacent Central Fladen option exhibiting the burrowed mud, seapens and burrowing megafauna PMF, if adequately protected, offers the best opportunity for buffering and possible enhancement of the tall seapen species. The ‘science-based alternatives (the Western Fladen and South East Fladen possible MPAs) only offer scientifically equivalent benthic habitat other than the nationally scarce Tall seapens and would therefore not contribute to the survival of our most significant Tall seapen community in Scottish offshore waters.

In summary:
By supporting the Firth of Forth Banks Complex MPA, Central Fladen MPA and Geikie Slide and Hebridean Slope MPAs, we are therefore supporting 29 of the 33 proposals.