Head to the coast this week with guest blogger Peadar O’Connell from RSPB Scotland, to find out more about the beautiful black guillemot. 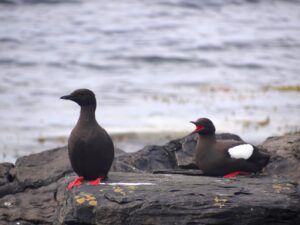 The black guillemot is a beautiful bird. All black apart from a smart white triangle on each wing and bright red legs and moth make it very striking in its summer plumage. The contrast in winter is remarkable as the black is replaced by white with black and grey speckles. You could be forgiven for thinking they are two completely different birds.

In the UK they are largely found around the west and north coasts of Scotland, including the Hebrides and particularly the Northern Isles of Orkney and Shetland. They are often seen sitting on the edge of manmade structures such as piers or buoys.

Black guillemots are coastal birds rarely venturing more than a few miles from the shore. They feed on a variety of small fish and marine invertebrates, often over kelp beds or sandy sediments and they can often be glimpsed with a small butterfish dangling from their bills. They nest in amongst boulders or scree and usually lay two eggs which hatch around late June or July. The chicks are fed on small fish like butterfish and sandeels. Adults dive for fish and invertebrates in shallow waters but have been recorded as deep as 50m.

Black guillemots are the only bird species that are protected by national Nature Conservation Marine Protected Areas in Scotland. To date no birds have been placed on the list of Scottish Priority Marine Features (PMFs). PMFs are species and habitats that are considered to be of “conservation importance” to Scotland and they must be considered in wider marine planning. The omission of globally important seabirds is a significant oversight and we would call on the Scottish Government to reconsider the lack of seabirds on this list.

Black guillemots are a very difficult species to survey due to their tendency to nest on small uninhabited islands or inaccessible boulder scree where their nests are difficult to find. Their estimated population appears to have been relatively stable since 2000. They are Amber Listed in the Birds of Conservation Concern in Britain due to a 29% contraction of their breeding population. The biggest threats faced by black guillemots include predation of eggs and chicks by invasive species (particularly rats and American mink), entanglement in set nets and oil spills. Activities which might affect their prey or habitats such as commercial seaweed extraction or hydraulic dredging may also be a concern in some areas. That is why we are pushing for the relevant MPA management plans to consider and where necessary address each of these issues to ensure the best areas for black guillemot remain so.
Six nature conservation Marine Protected Areas have been identified and designated for black guillemot. These are: