The potential of MPAs 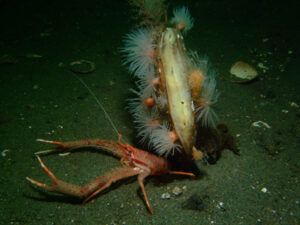 A new report has shown that rare species could re-colonise Scotland’s seabed if given a chance to recover. The study – using predictive modelling to understand the distribution of Fan Mussels – reveals the massive potential of Scotland’s Marine Protected Areas to enrich the health and complexity of our seabed.

Fan Mussels (Atrina fragilis) is one of the largest and rarest bivalve molluscs in UK waters and is listed among the most threatened species in the North Atlantic. The authors explain that the “distribution of A. fragilis is known to be negatively affected by benthic fishing practices), as fishing gears can damage the emergent portions of the fragile shell and dislodge the animal. The first pass of benthic fishing gears has the greatest impact on the benthic community (Jennings & Kaiser, 1998), although this may depend on species specific vulnerabilities (Boulcott & Howell, 2011)”

The study highlights that industrialized benthic fishing practices have “probably had a large impact” on its contemporary distribution and a 2010 report by the UK Joint Nature Conservation Committee estimated that if protective measures were not taken, A. fragilis was likely to become extinct in the United Kingdom within 10 years

Although fan mussels are thought to exist in just a few patches of our seas, evidence now suggests that there is suitable habitat in Scotland’s seas for the once abundant fan mussel to recolonise up to 97 square kilometres within the MPA network.

If nothing else, the report highlights an important field of ongoing research to inform the future management and potential of MPAs.