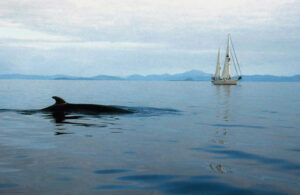 Two years ago, the Scottish Government made the historic announcement designating 30 new, and much needed, nature conservation marine protected areas in Scotland’s seas. It was the 24th July 2014 and on the same day, the Scottish Government also announced their intentions to progress 4 further nature conservation MPAs for the protection of some of Scotland’s most iconic species, such as basking sharks, minke whales and the unusual Risso’s dolphin, and 14 long-awaited Special Protection Areas for threatened seabird species. Well, the SPAs are finally going through consultation right now, and some of our most vulnerable seabed features are now legally protected by management measures within some of the inshore MPAs. We have even been through a consultation just this year for a much-anticipated harbour porpoise Special Area of Consultation (SAC) on the west coast of Scotland. But what about the rest?

There are many who might think that 30 MPAs plus 14 SPAs (plus all the SACs that are already designated) equates to a lot of protection (or potential protection) for Scotland’s marine wildlife. And it does – but it’s not enough, at least for some species. Most of the marine protected areas in Scotland are designated and managed in a certain way for individual species – so while some of these existing measures may benefit other species that happen to live in the same area, there are still some threats that are not being addressed, particularly for large animals such as whales and sharks.

All cetaceans (whales, dolphins and porpoises) and basking sharks are protected as species under European law, the Habitats Directive, which means that it is illegal to intentionally or unintentionally harm, harass, injure or kill them. All well and good – but with ever increasing human activity in our seas, these species are being unavoidably and increasingly threatened, however unintentionally, by different pressures. Scientists continue to observe strandings of whales and dolphins on our beaches, changes in their movement patterns, and even high levels of chemical pollution in their body chemistry as a result of development at sea and in our coastal areas. Activities such as fishing can also cause injury and mortality through bycatch (accidental capture in towed nets) and entanglements in creel ropes. More than just species protection is needed to manage these conflicts between humans and animals – that’s where the MPAs come in. The 4 proposed MPAs have been recommended in areas considered important hotspots for some of these species, such as summer feeding grounds that they return to each summer. And if formally designated, through the use of management measures, the Scottish Government will be able to apply some spatial protection within these MPAs, which will mean there will be areas where certain activities are managed more carefully or cannot take place at all, and the animals will be less likely to come into conflict with something that will harm or disturb them – or the habitat they rely upon.

And these MPAs will have benefits both ways. Some of these species are big – really big – like the basking shark for instance; it’s the second largest fish in the world, after the whale shark, reaching lengths of over 10 metres. No fisher wants to catch one of those in their fishing gear, such bycatch can be really distressing as well as costly. What’s more, Scottish whales, dolphins and sharks along with many other marine species are a huge draw for tourists, who come from all over the world to see and photograph them in their natural habitat. In fact, in 2003 whale-watching on the west coast of Scotland alone was estimated to be worth about £7.8 million a year. If there are people spending that much just to see Scottish wildlife, they’re probably spending even more on hotels, restaurants and other local attractions as part of their trip. So there are potentially massive implications for Scotland’s economy of not properly protecting the species like these.

And it’s not just about the big things – the small stuff is missing out too. The 4 proposed MPAs also include species such as sandeel – a small but hugely important fish that makes up a staple part of the diet of seabirds, smaller marine mammals (such as seals and porpoises) and other fish (such as cod and small sharks) – and some vulnerable seabed features, such as sea fans. They also include non-living aspects of Scotland’s seas, known as geodiversity features – these are important parts of the geology of the seabeds, some of which ensure the survival of key marine habitats. For example, geological carbonate production areas are vital for sustaining the right chemistry for habitats such as maerl beds and corals to survive, and which contribute to the production of machair, an unusual but very fertile type of coastal plain found only in Scotland and Northern Ireland.

With such huge conservation needs riding on these 4 MPAs, we ask: why are they being delayed? These are major gaps in Scotland’s developing MPA network and if action is not taken soon, they may become major opportunities lost for us and for some of our most stunning and iconic marine wildlife.