This week we hear from guest blogger Erin, Earth Hour intern at WWF Scotland, about how we can all take action to help tackle climate change. Earth Hour 2018 will be celebrated on Saturday 24th March at 8.30pm. 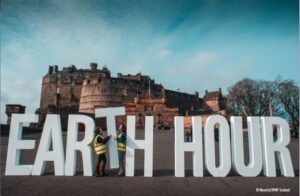 WWF’s Earth Hour is the planet’s greatest campaign to tackle climate change. Its unique display of darkness has become a global phenomenon over the past decade, and 2017 saw the most successful Earth Hour yet.

What started in Sydney in 2007 as a simple switch-off has evolved exponentially, and expanded to reach 187 countries around the world, spanning all seven continents. To celebrate the event each year, hundreds of millions of people organise eco-inspired events and activities, and switch off their lights to show solidarity in the demand for action on climate change.

Scotland has long been a forerunner in WWF’s international campaign, as the first country to secure support from all local authorities. Last year, 165 local and national landmarks went dark, including Edinburgh Castle, The Kelpies, Eilean Donan Castle, The Forth Bridge, the Falkirk Wheel, Stirling Castle, and Clyde Arc. These were joined by the likes of the Eiffel Tower, Big Ben, the Sydney Opera House, and a further 3000+ iconic buildings around the world.

This year, Earth Hour has some new features, aimed at extending the message of the campaign beyond the impactful on-the-night visuals. WWF is asking everybody who participates to make a ‘Promise For The Planet’: a small and simple lifestyle change to live more sustainably. In general, the promises are geared towards reducing emissions that contribute towards global warming, and there are also specific options that will help our oceans in other ways.

Recent shows such as BBC’s ‘Blue Planet II’ have resonated with the viewing public, exploring the lives of species affected by humans’ impact on the oceans, in particular relation to the fact that plastics are choking marine life, and microplastics thought to be affecting the procreation of several species: it comes as no surprise that the Earth Hour promises related to ditching single-use plastics are proving the most popular of the campaign so far. The promise of switching to a more plant-based diet, becoming a ‘flexitarian’, will also help to relieve the strain on our oceans caused by unsustainable fishing. 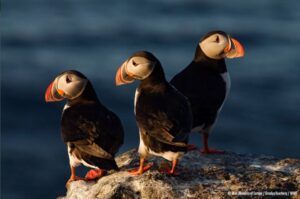 Here at WWF Scotland, we have decided to focus our message this year on the link between climate change and species, leading with the shocking statistic that one in every six of Earth’s species are at risk of extinction from climate change. These include some of our best-loved animals, such as snow leopards, polar bears, cheetahs, and elephants, and iconic Scottish species such as bottlenose dolphins and puffins. Warming climates are causing the habitats of this wildlife to change in ways that diminish their feeding and breeding grounds, and increase the likelihood of dangerous human interaction.

By connecting climate change to the planet’s species, Earth Hour is giving a face to the devastation occurring around the world. Fittingly, the face of our campaign this year has been that of a marine turtle. Marine turtles are affected by climate change in several ways, principally to do with the fact that temperature affects the sex of a turtle hatchling: a recent study showed that up to 99% are hatching female due to the heated temperatures of the sand that incubates them, threatening the long-term viability of some populations. Marine turtles are only one example of how climate change is affecting ocean-life, as problems such as increased acidity and coral bleaching threaten many, many others with extinction.

WWF’s Earth Hour offers a way to help. In my role as an Earth Hour officer, it has been my responsibility to contact stakeholders across the country, and encourage them to take part and do their bit for the planet. There is already an impressive number of events and activities lined up for this year’s campaign, including: Climate Week North East: a week-long event organised by Aberdeen City and Aberdeenshire Councils; a whole evening of activities at Kelvingrove Museum in Glasgow; a range of buildings and landmarks in Dundee being lit in green for the week running-up to Earth Hour; and East Dunbartonshire Council working to develop a sustainable school meals cook book. There are also a host of on-the-day local activities happening the length and breadth of the country, such as illuminated cycles, stargazing and moon watching events, film screenings, and an influx of Smoothie Bikes hitting locations in several cities. Head to your local authority website and social media channels to find out what’s happening near you. 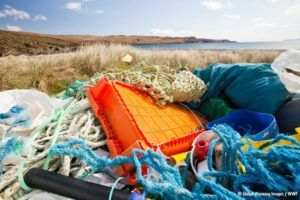 As 2018 is the Year of Young People, Earth Hour is a fantastic opportunity for younger generations to demonstrate their commitment to tackling climate change. We will bear the consequences of environmental decisions made today; it is in our own interest to prioritise the wellbeing of our planet, and this starts with showing governments and decision-makers across the globe that we care, by participating in events such as Earth Hour. Organising your own on-the-night activity or posting about your participation on social media channels will help to spread the word.

Make your #PromiseForThePlanet on the WWF Scotland website here – http://www.wwfscotland.org.uk/earthhour – and share your selection with your online community, encouraging others to do the same. Taking part is easy.

We’re working to make Earth Hour 2018 the most successful yet. Join us on 24 March at 8.30pm, and help to address the most serious environmental issue facing our brilliant planet and its species.