The National Marine Plan – all journeys start with a single step 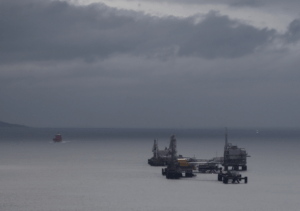 Our campaign blog explains how marine planning is the key to embedding sustainability and why the Scottish Government has no choice but to challenge the status quo.

Public discussion of the ‘National Marine Plan’ recently debated in Holyrood – and published on 27th March – revealed Scottish politicians’ varied approaches to sustainability and marine development. It wasn’t a well-attended debate; perhaps only 20 MSPs were present in the chamber, but it highlighted the increasing awareness by our representatives of the importance of marine policy, not just as some technocratic exercise in carving up a remote resource, but as a pressing issue of public interest. The debate signalled just how far we have come and that Scotland’s politicians are listening to the many and growing champions of our marine environment.

High-level guide
On the surface, the National Marine Plan is a high-level document which in many ways won’t really change anything – much of its content serves as a compendium of existing policy; this just happens to be the first time it has been pulled together into a single high-level strategy. During its lengthy five year gestation, the Plan has been criticised for being non-existent, delayed, too industry-focussed; now its greatest sin is being an overly complex mixture of the high-level and occasionally over-prescriptive.

Our view is that the Plan is necessary and impressive given the scale of the challenge and that there are some important aspects of the Plan which will make a difference to how local authorities, developers and communities engage in marine planning, namely:

For the 100+ respondents to the National Marine Plan consultation, few seem to disagree with the importance of these things. It would be too harsh to write-off the Plan as gathering together meaningless policy platitudes, but you get the picture. It won’t actually mean anything until the Plan is being used, interpreted and having planning impact on the ground (in the sea), referred to in planning and licensing decisions.

Members of this campaign are immensely supportive of marine planning, having successfully called for its requirement in law. It starts – for the first time in the history of Scotland – to establish a mechanism for strategically managing our seas. But we have consistently expressed concerns about some key aspects of the Plan – not least the embedding ambitious targets for the growth of salmon farming which have never been subject to environmental assessment, and a recklessly gung-ho approach to energy policy which props up and locks in climate-changing policy of maximising fossil fuel extraction from the North Sea.

It is for the above reasons that we felt compelled to offer this press release in response to its publication. There is absolutely no doubt that it is a welcome step-change in the way we look after our seas, but that step change is by no means a leap forward – it is just the first step in a longer journey in addressing the challenges of this century and in righting some past mistakes which has led to ecological decline.

Few politicians have answers to these difficulties. Salmon is a big export. And projected oil and gas revenues are currently a fixed assumption in budgetary balance sheets. We know that too. Cabinet Secretary Richard Lochhead acknowledged these concerns, suggesting that the Plan remains “flexible”. Unfortunately we fear that high-level policies which outline objectives to produce a specific tonnage of farmed salmon is not a flexible approach and will have a significant influence on planners. In regard to the inclusion of aquaculture targets, we still contend that these should be made subject to a full Habitat Regulations Appraisal process – a point we made in Parliament prior to its publication – and argue that their inclusion in the Plan sets a worrying precedent.

Community planning – a sea change ahead?

One of the most notable aspects of the debate was the reference to local, community-level action and views as a legitimate and important aspect of developing marine planning and local stewardship of coastal resources. During the recent public consultation on the management of inshore MPAs, a local group in Wester Ross, Sea Change, coordinated a petition to protect the Summer Isles from the damaging impacts of scallop dredging. The petition attracted a large number of signatures and has galvanised the area to take a greater interest in developing local management. During the Parliamentary debate of the Plan in February, significant mention was made of the effort and vision of the Community of Arran Seabed Trust referred to as “one of the UK’s leading community marine conservation organisations.” And Claudia Beamish MSP successfully lodged a motion for the Scottish Government to take note of our “Don’t Take the P campaign”. These details highlight that marine planning is becoming an increasingly public issue.

The limits of balance

One important moment in the debate arrived when the Cabinet Secretary addressed the perceived tension between different community interests in relation to reforming inshore fisheries: “Many members have alluded to delicate balances and I want to highlight some of the issues that arose during the debate that might illustrate the challenge facing the Government in striking that balance. Margaret McDougall and Rob Gibson spoke about the calls for more fisheries conservation at the local level in different parts of Scotland. At the same time, we have the committee’s recommendation that we should perhaps put more safeguards in for the fishing industry. It is difficult to have it both ways, so we have to strike a balance because, in the eyes of some, those two positions are incompatible.”

And in a refreshingly entertaining reflection on the debate Holyrood Magazine’s Liam Kirkaldy suggested that “it is better to walk a tightrope than walk the plank.” But the Plan unfortunately cannot actually walk a tightrope. The history of Scotland’s seas has not been one of carefully coordinated management, so the tightrope is not really an option: the real challenge is to recognise that our seas are out of balance. We know this and cannot forget it. Our government’s best appraisal of our seas says so and our coastal communities are living in the shadow of severe ecological decline. We argue that marine planning must deliver environmental improvement, not just manage economic development. Managing Marine Protected Areas effectively is a key step in doing that.

It is how Ministers, planners, developers and communities alike work together to redress that ecological imbalance – however difficult that proves to be – which will be the mark of Scotland’s ongoing project in marine planning. The status quo is not an option.