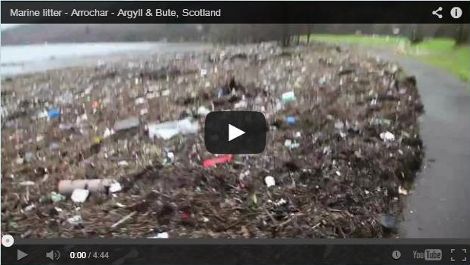 The following video shows a walkover of the marine litter that has washed up on the shores of Arrochar in the first two weeks of 2014. The words ‘crying shame’ spring to mind, because this is such a graphic, in-your-face example of the damaged state of our seas.

Arrochar is nestled at the head of Loch Long, a slender sea loch that stretches 20 miles north from the Firth of Clyde towards the majestic slopes of the Lomond hills. Once the site of a thriving West coast fishery, the village is more dependent on tourism than the bounty from diminished fish stocks. But Arrochar’s few hundred metres of usually postcard-worthy shoreline have been transformed by a tide of seaweed tangled up with masses of rubbish. The ratio looks like about 2 parts seaweed to one part plastic.

Storm debris is washed up each year, but locals say they have never seen it as bad as this. The ugly result is a headache for both local businesses that rely on tourism and the local authority budgets that are needed to clean it up. There have been some locally-organised clean-ups in recent weeks, but there is still more to do.

This is not just an aesthetic and economic problem. There is a deeply problematic, long-term environmental issue that affects us all. Many plastics and composite materials do not biodegrade and therefore over the years our oceans are filling up with litter that simply will not break down. This has shocking consequences:

Where does this litter come from? A whole range of industrial sources: from shipping waste, microplastics from fishing nets, and fish farm debris. Much of it is also litter discarded by us all on land. Whether it is blown out of landfill or illegally littered, it winds it way into the sea, from beaches or via rivers. A recent study shows that this litter is not just the stuff you see floating down rivers; huge amounts of plastic contaminants are carried beneath the surface.

We need a plan

What’s the solution? First of all we need a plan. The scale of the problem is such that it would be foolish to just wade into the litter swamp without thinking strategically. We need to tackle the root causes of the litter and divert serious amounts of money and resources to dealing with the worst and most pressing ecological risks that marine litter poses.

This year, the Scottish Government will publish a National Litter Strategy and set up Regional Marine Planning Partnerships. If properly resourced and integrated with the local authorities, regional marine planning partnerships (perhaps they need a better name), could help direct coordinated action on marine litter. Some coastal forums (such as the Clyde Forum) have done some work, but without the resources in place, this will remain aspirational and the problem will persist.

If you would like to help turn the tide on litter, come along to the MCS Beachwatch training day at Our Dynamic Earth in Edinburgh on Saturday 22nd February 2014. You can register to take part in the training day by emailing MCS Beachwatch Officer Lauren Eyles: lauren.eyles (@) mcsuk.org

Some schemes are already making a difference. A growing number of beach cleans (organised both locally and by national charities) are also taking direct action. The Marine Conservation Society (a member of the Save Scottish Seas campaign) has been gathering the evidence for over 20 years to help combat the problem through its Beachwatch project, involving hundreds of beaches and thousands of volunteers across the UK, including in Scotland, every year since 1994.

Every season, groups across Scotland survey the rubbish on their local beach, culminating in the Beachwatch Big Weekend every September as part of the International Coastal Cleanup and the most recent statistics from 2012 revealed the problem is increasing – of the 35 beaches cleaned, 2,041 pieces of litter were found per kilometre. It is this on-the-ground evidence which helped to secure the Scottish Government commitment to produce a Marine Litter Strategy, but we are still waiting for it and these recent pictures from Arrochar show just how urgently we need it.

Other initiatives are also beginning to. Fishing for litter is an excellent initiative whereby fishing boats can help to scoop out and take back to shore the litter from the sea that is inadvertently hauled aboard.

But these efforts are just a carrier bag in the proverbial plastic ocean. Until we all – individually and collectively – cut down on the amount of non-biodegradable waste we are creating, this is a problem that will grow and grow. The ecological costs we risk with inaction are incalculable.

If you would like to help turn the tide on litter, why not attend the MCS Beachwatch training day at Our Dynamic Earth in Edinburgh on Saturday 22nd February 2014. You can register to take part in the training day by emailing MCS Beachwatch Officer Lauren Eyles: lauren.eyles (@) mcsuk.org