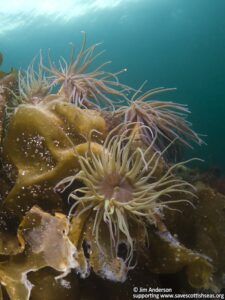 Biodiversity is the variety of life on earth, its biological diversity. Healthy habitats form the foundations of healthy and biologically diverse ecosystems that provide many ecological benefits. There is growing recognition among scientists that ecosystems with high levels of biodiversity are more stable and resilient to change, such as those caused by coastal and offshore development, fishing activity and those predicted with climate change. While unhealthy ecosystems can have negative knock-on effects through society, healthy marine ecosystems can result in greater long-term benefits to society, such as food provision, minerals, storm and flood protection, and they can also store carbon.

Scotland’s seas are highly productive and support an array of habitats and species. Deep-sea sponge communities, maerl beds and seagrass beds as well as internationally important species such as northern feather stars, burrowing sea anemones, northern sea fans and cold water corals can all be found in Scotland’s marine environment. However, despite the variety of marine life in Scottish waters, the State of Nature Scotland report (2016) demonstrates that breeding Seabird numbers, a good indicator of the state of the marine environment, have fallen by 38% since monitoring began in 1986.  The findings reflect earlier observations presented in Scotland’s Marine Atlas that show human activities such as overfishing, coastal development and deep sea exploitation, as well as anthropogenic climate change, are driving declines in Scotland’s marine biodiversity.

In recognition of the importance of maintaining and enhancing the health of our environment, the UN Convention on Biological Diversity (CBD) agreed a Strategic Plan for Biodiversity in 2010, aimed at protecting and enhancing biodiversity at a global level. The Plan included twenty ‘Aichi Targets’, many of which directly relate to the health of the marine environment, to be completed by 2020. In response to this, the Scottish Government produced  A Route Map to 2020 setting out the six ‘Big Steps for Nature’ and 12 ‘Priority Projects’ needed in Scotland to achieve the Aichi Targets.

Big Step 6 of Scotland’s 2020 Route Map requires marine and coastal ecosystems to be restored by 2020. This goal hinges on the success of Priority Project 12, which aims to increase the environmental status of Scotland’s seas by establishing effective protection and management of nature in Marine Protected Areas (MPAs). The Route Map set a target for 10% of Scotland’s seas to be designated MPAs and protected from damaging activities.

How is Scotland doing so far?

With just three years until 2020, and a full progress report due in 2018, Scottish ministers have begun to review Scotland’s progress to meeting these targets. The First Progress Report 2015/16 showed that the target of 10% MPA coverage has been exceeded, with 16% of marine areas in Scotland under site protection. This demonstrates the great strides made so far in developing Scotland’s MPA network. However, designation does not mean management. Without effective management measures in place, MPAs will not reach their conservation objectives, and become merely lines on paper.

In order for Scotland to reach its Aichi targets, the developing MPA network must be completed. Additional MPA sites will need to be designated to fill the remaining gaps in coverage, such as for seabirds and marine mammals. All MPA sites will require effective management plans if Scotland is to achieve a network of ecologically coherent and well-connected MPAs. Adequate resources will need to be made available to support a marine monitoring strategy and develop scientific research on MPAs to help identify additional areas requiring protection and demonstrate that the management measures in place are working.

Delivering on Scotland’s biodiversity targets, and ensuring the sustainable development of Scotland’s seas will require coherent management of all marine activities within and around the MPA network. The future development of Scotland’s 11 Regional Marine Plans  – integrated regional-scale plans that aim to sustainably manage all marine activity within Scotland’s inshore waters – provides an excellent opportunity to incorporate MPAs into the marine planning and decision-making process.

Although efforts to protect and restore biodiversity in Scotland are beginning to deliver, there is still a way to go to ensure Scotland meets its international commitments. This includes upcoming challenges to complete the ecologically connected network of MPAs, and ensure these have effective management measures in place.