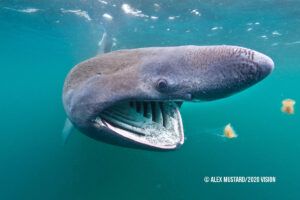 Growing up to 10m long, and often seen ‘basking’ with their huge mouths open at the surface, basking sharks cruise Scottish waters each summer. This gentle giant, the second largest fish in the world, was once fished commercially around Scotland for the oil in their huge livers. The commercial fishery for basking sharks severely depleted their numbers. A once common but now rare sight, it is thought basking shark populations have decreased by 80% since the 1950s.
Today, the basking shark population is still recovering and these magnificent creatures are at risk of becoming bycatch in fishing nets, and can be easily disturbed by jet-skis, speedboats and other vessels as they swim near the surface. As a result, basking sharks are listed as officially endangered in the North East Atlantic on the IUCN Red List of species, and are a species of conservation importance in Scottish and wider UK waters.

Spatial protection of highly migratory species, such as the basking shark, throughout their life history is challenging. However, MPAs with effective management measures in place can be used to protect areas that support key life stages for basking sharks, such as breeding and foraging grounds, providing protection for important spaces enabling populations to recover. On this basis, a Scottish Marine Protected Area (MPA) was proposed in 2014 to protect vitally important habitat for a range of species, including what is thought to be a potentially important basking shark breeding site. The proposed MPA would cover 10,325(km2) in the Sea of Hebrides, stretching from the Isles of Skye and North Uist down to the south west coast of the Isle of Mull, and with adequate management measures in place would also provide protection of areas important for the minke whale, for tidal fronts and important geological features of the seabed.

Research findings
A new study carried out by researchers at the University of Exeter in conjunction with Scottish Natural Heritage (SNH), highlights the importance of this proposed MPA for the basking shark. Using satellite tags, the researchers were able to track the movements of 36 basking sharks on the west coast of Scotland over three summer seasons (2012, 2013 and 2014). Five of these sharks were tracked for more than one year, with three returning a second year, and two returning twice. The data was used to identify key areas of residency (spaces where the sharks remained during the summer) and fidelity (areas where sharks would return to after periods of sustained absence).
The researchers found 86% of the tagged sharks showed some degree of residency to the proposed MPA, noting three distinct movement behaviours of the sharks throughout the summer; sharks would remain close to the tagging location around the coastal waters of the Isles of Coll and Tiree; sharks were highly mobile using a high proportion of space within the proposed MPA; or sharks would leave the site altogether, either permanently or re-entering later in the summer. During this time, the basking sharks that remained within the proposed MPA sites were observed foraging and also displaying behaviours usually associated with courtship, although no mating was observed.

By gaining an insight into the biology and movement of basking sharks, the researchers established that the proposed MPA site boundary would cover areas of core activity for the sharks. The evidence also suggests that complementary MPAs could be designated to encompass other areas observed in satellite tracked basking sharks, such as the North West coast of Ireland, the North coast of Northern Ireland and waters to the west of the Outer Hebrides. The findings of this project add to information gathered by boat-based surveys and public reports in the area over many years, including by Scottish Environment LINK members the Hebridean Whale and Dolphin Trust and the Marine Conservation Society, that demonstrate the importance of this region for the basking shark.

Recommendations for management
If the site is designated, effective management measures will be required to protect and restore basking shark populations. As basking sharks are vulnerable to disturbance at the surface, these measures could include: restrictions on vessel speeds -potentially seasonally (May-October) – and regulations on fishing gear. Fishing regulations in areas of higher relative importance within the proposed MPA boundary could include: prohibiting bottom set static gear to avoid entanglement and restrictions on trawling to reduce bycatch of basking sharks. As the area is also a wildlife watching hotspot, wildlife watching boats should look to adhere to the Scottish Marine Wildlife Watching Code (SMWWC) and WiSe Scheme.

Next steps
For the site to allow basking shark numbers to recover, it must first be designated. The consultation on the designation of these sites has now been postponed twice since the Scottish Government first announced their intention to consider the Sea of Hebrides MPA in 2014, along with another three proposed MPAs for iconic mobile species such as the minke whale and Risso’s dolphin as well as northern sea fan and sponge communities, shelf banks and mounds and shelf deeps. Urgent action is required to provide much needed protection for these magnificent creatures.