Scotlink/Funding the Nature and Climate Emergency: reversing a decade of austerity for the environment

Funding the Nature and Climate Emergency: reversing a decade of austerity for the environment

Seven months ago, Scotland’s First Minister announced a climate emergency and the need for ‘transformative change’ if we are to limit global temperature rise to 1.5oC and halt the loss of nature. This announcement came in the wake of two in-depth scientific reports from the United Nations highlighting the worsening twin global climate and nature crises. The Intergovernmental Panel on Climate Change’s October 2018 report estimated that the world has roughly 10 years to bring down carbon emissions and prevent damaging climate impacts. The Intergovernmental Science Policy Panel on Biodiversity and Ecosystem Services (IPBES) report, published in May 2019, outlined the ongoing and worsening declines in biodiversity across the globe. More recently the State of Nature Scotland 2019 report 1, published in October 2019, found that Scotland is mirroring these global trends, with no overall let up in the loss of biodiversity. This is the context in which we need an immediate response to limit greenhouse gas emissions and halt and reverse declines in nature.

Transformative change requires commitment from governments at all levels to act to reverse declines in nature, underpinned by targeted and sufficient funding. However, the Scottish Government has been in receipt of falling funding from the UK Government as a result of austerity measures and local authorities providing public services are under pressure from tightening budgets. Environmental NGOs and others have noted declines in funding for the environment agencies across the four countries 2.

Figures from the Scottish Government’s proposed annual budgets (see notes below) reflect the steep declines in funding for Scotland’s public environment agencies and environmental research over the last decade. 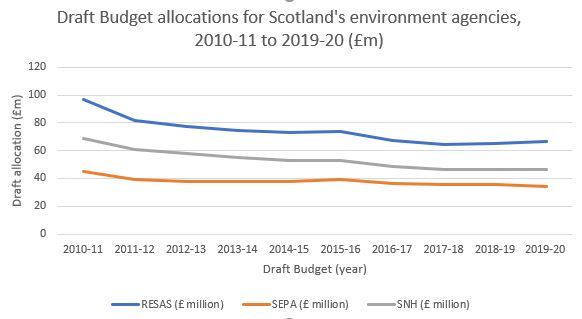 It is important to note that a proposed budget is not exactly what may end up as an agreed budget. However, the declines are significant enough to indicate that the publicly-funded organisations that seek to investigate, understand, advise and provide evidence on ways of protecting and enhancing Scotland’s environment are now provided with significantly less direct funding from central government than they were at the start of the decade. Compared to nine years ago, the annual aggregate SNH, RESAS and SEPA budgets have been cut by almost £100m, measured in 2019 prices, a staggering 40% reduction in real terms 3. Now that the urgent need to address the climate emergency and biodiversity crisis has been widely acknowledged, funding for the environment agencies and environmental research must surely not only be reinstated, but substantially increased. 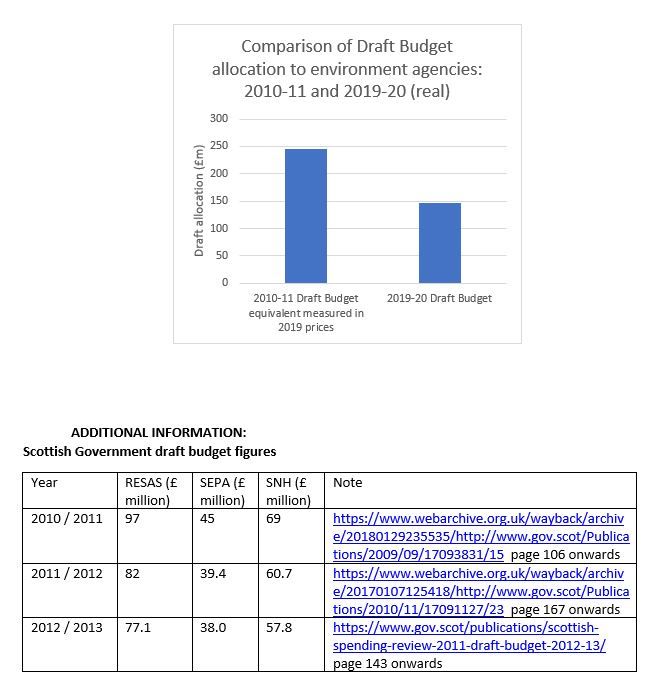 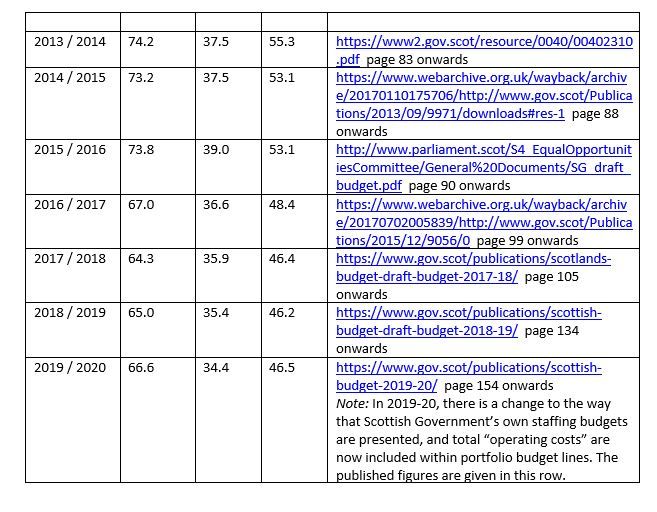 3 This was calculated using the GDP deflators, available at: https://www.gov.uk/government/collections/gdp-deflators-at-market-prices-and-money-gdp