During part one of COP15 , MSP Nature Champions provided real-life examples of crucial species and habitats that maintain ecosystem function whilst raising awareness of the inextricable link between the nature and climate crises.

COP15: the UN biodiversity summit tasked with agreeing the next set of 10-year targets to half and reverse nature’s decline is hosted by China, and held in two parts. The first part took place between the 11th and 15th October. Part two will commence next May in the city of Kunming with the completion and adoption of the Post-2020 Global Biodiversity Framework, a crucial stepping stone towards the 2050 vision of “living in harmony with nature”. Over the course of the first part of COP15 , MSP Nature Champions provided real-life examples of crucial species and habitats that maintain ecosystem function whilst raising awareness of the inextricable link between the nature and climate crises.

The Nature Champions Back Biodiversity social media initiative shone a spotlight on a variety of plants, marine wildlife, pollinators, animals, peatlands and native woodlands that are vital in maintaining ecosystem function. The initiative also highlighted the importance of nature in tackling the climate crisis on the run up to the UNFCCC COP26 in November this year. 2021 is a big year for the planet, with significant decisions due on how we tackle two of our greatest global challenges; the inextricably linked climate and nature crises. People depend on nature, from oceans to forests, to supply clean air and water, and to regulate rainfall that is vital for food supplies. If too many species vanish, and ecosystems start to fail, our natural life support services will falter. Political support for protecting our precious natural environment has never been more critical. The Nature Champions initiative hopes to put biodiversity at the centre of the parliament’s attention. Our environment has no voice so we need Nature Champions to stand up for it and back biodiversity.

Take a look at what our Nature Champions shared on Twitter during part one of COP15: 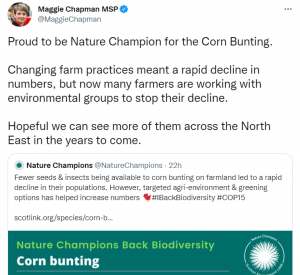 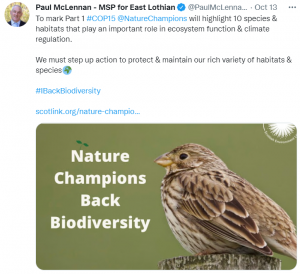 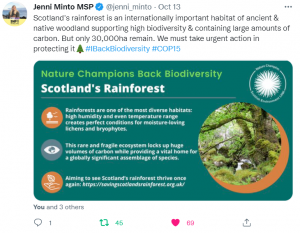 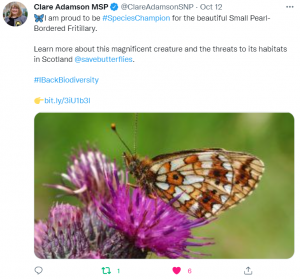 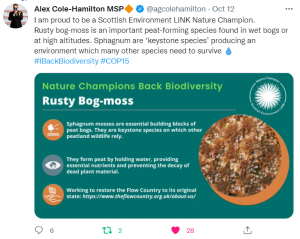 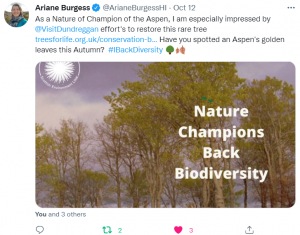 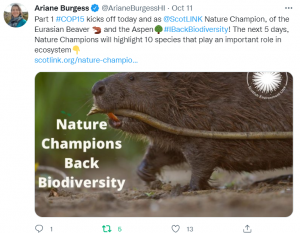 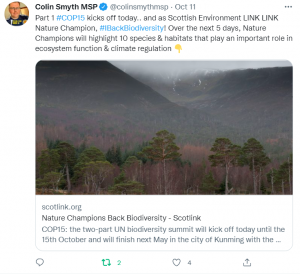 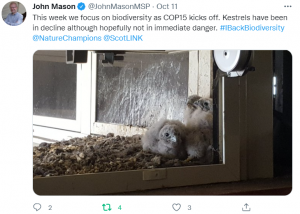 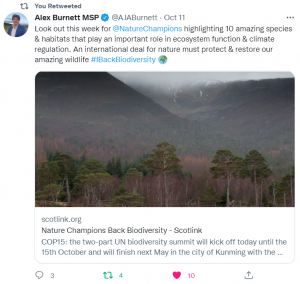 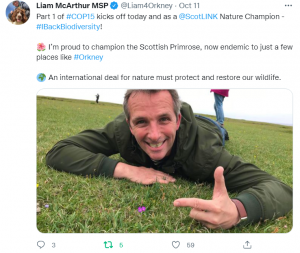 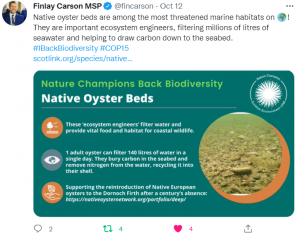 Why is COP15 important?

The Convention on Biological Diversity (CBD) originally signed at the Rio Earth Summit in 1992 and later ratified by about 195 countries, is designed to protect diversity of plant and animal species and ensure natural resources are used sustainably. COP15 aims to set both long-term goals for mid-century and shorter-term targets for 2030 and, crucially, push for those to be enshrined and delivered through national policies. At the CBD 2010 talks in Nagoya, Japan, 194 countries (or Parties) signed up to a series of 20 targets, called the Aichi targets, to be met by 2020. Fast forward a decade to 2020, and the 5th Global Biodiversity Outlook report revealed that these targets were spectacularly missed across the world. The UK failed in their contribution towards the targets, and Scotland did too, in failing to meet 11 targets.

The recent commitment in the Programme for Government to a Natural Environment Bill that would include targets to halt the decline of nature in Scotland by 2030 and drive substantial improvements in nature by 2045 is very welcome. However, we need to see real and substantive action towards the CoP15 targets before it is planned to be brought forward until 2023, year three, of the Parliament. Experts in IPBES urge that with less than nine years to enact transformative change before the 2030 deadline – nations and multilateral bodies must begin to act decisively today to create a liveable future for people and nature.

For more than 30 years, the international community has tried and failed to find a path to slow down — and eventually reverse — worldwide declines in the richness of plant, animal, insect and fungi species. These efforts to protect the natural world have yet to achieve the same high profile as those to limit climate change. We have already seen what can be achieved when we speak up for nature. In 2019 people of all ages came together across Scotland to demand action on the climate crisis and within just five days the Scottish Government increased its 2030 emissions reduction targets to 75%. We need to build the same level of momentum for nature itself.

TheNature Champions initiative has been developed by Scottish Environment LINK to encourage Members of the Scottish Parliament to champion endangered or iconic species and habitats, raising awareness and promoting action to restore and safeguard Scotland’s environment. With 1 in 9 species at risk of national extinction, political support for restoring and protecting our natural environment has never been more critical. At the start of this Decade for Ecosystem Restoration, now is the time for Nature’s voice in the Scottish Parliament to be strong, loud and well informed.

You can find the Nature Champion Back Biodiversity infographics here: