Scotlink/One step towards getting land use on the right track

One step towards getting land use on the right track

Land reform is back on the agenda in Scotland with a new Bill now passing through Parliament. While most of the media coverage of this issue has centred around the inequitable pattern of land ownership in Scotland, it’s the use of our land, its management and stewardship, which is of more concern for environmental organisations.

In LINK we start from the position that much of the way we currently use the land in Scotland is not sustainable. Taxation and subsidy regimes have driven historic patterns of land use, and all too often this is for single or limited uses of the land with no reference to the public interest and the principles of sustainability. Decisions about the use of the land across huge tracts of our country are taken by a small number of people with little public accountability. There is often no opportunity for the local community, or national charities representing the wider public interest, to get involved in these decisions. However, we believe that huge economic, social and environmental benefits could be obtained from improving the levels of sustainability in the way we use the land.

LINK is tackling various issues related to unsustainable land use patterns through the combined work of our members. One strand of this work is our hill tracks campaign, which gives a clear example of how the public interest has not been well served by the existing system of land ownership and land use.

Since the early 1970s recreation and environmental organisations have grown increasingly concerned about the unregulated proliferation of such tracks right across Scotland. Landowners say these tracks are required for legitimate land management purposes; tracks built for agricultural or forestry purposes enjoy permitted development rights and so planning permission is not required. But this privilege has often been abused and many tracks are simply built for ferrying shooting and stalking clients up a hill more easily. Even our National Parks are not protected, with planning permission only required in National Scenic Areas. The lack of regulation has meant that many of these tracks are badly constructed and prone to erosion, causing much environmental damage. 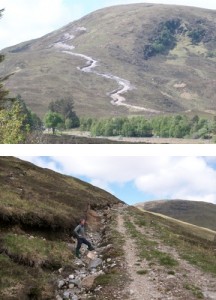 The LINK hill tracks campaign was formed to try and bring these tracks into the planning system and we’ve had a measure of success, in that from 2015 landowners need to notify planning authorities in advance of new track construction or improvements they are making to existing tracks. Unfortunately this falls short of the full democratic scrutiny and the upholding of the public interest that the full planning process would ensure. Also, since the Cairngorms National Park Authority does not have full planning powers, it is not automatically informed about any notifications. But across Scotland it is now easier to know where new tracks are constructed or improvements made, and conditions can be set and enforced with regard to their construction.

We have been monitoring the situation by asking our members to send in photos of new tracks and then checking planning lists. We hope the prior notification process will lead to an improvement, and possibly a reduction, in the new tracks which are built. The signs so far are mixed. On the positive side, the forestry industry has accepted the changes and is streamlining its own forestry planning processes to encompass the new system. Also one proposed track in the Highlands has gone straight to a planning application, rather than simply being constructed as it would have been last year. The justification for this track is that the elderly shepherd can no longer easily tend his sheep on the hill – oh, and there are a few grouse butts nearby. It’s likely the main purpose for this track is for field sports and it may well be approved, but at least the public has an opportunity to comment on the plans and make suggestions.

On the downside, a prominent Cairngorms landowner is busy ‘improving’ a track by felling trees to widen the route and resurfacing it without any prior notification. In fact, in this case, the track is in a National Scenic Area, so it should automatically require a planning application, something conveniently forgotten by the landowner.

Land reform should seek to balance the public interest, rights and responsibilities in land with the legitimate rights of all owners or managers of land. The way that land is held is a public matter and it is legitimate and proper for the public to seek to inquire, debate, reform and adapt it. If our monitoring of hill tracks suggests that landowners still aren’t recognising that public interest in the way they use their land, LINK will be pressing for full planning requirements for all new tracks.