Scotlink/Protecting flame shell reefs in Loch Carron and beyond

Protecting flame shell reefs in Loch Carron and beyond 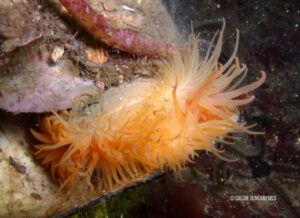 You might have heard about recent events at Loch Carron. Back in April there were reports that scallop dredging, a form of fishing that pulls heavy toothed metal rakes and chain bags along the seabed, had damaged a flame-shell reef in outer Loch Carron.

Subsequent surveys of the seabed by Scottish Natural Heritage (SNH) and Marine Scotland Science corroborated the earlier reports by local community witnesses and the data gathered by local divers after the incident – to the great credit of the recreational divers first on the scene to record the presence and location of the damage. In response to this, the Scottish Government announced a new Marine Protected Area (MPA) at Loch Carron, with the specific aim to prevent further decline and support recovery of the flame shell beds.

Earlier this week, Save Scottish Seas coalition members wrote to Roseanna Cunningham, the Cabinet Secretary for Environment, Climate Change and Land Reform, welcoming the decision to designate the sea loch a Marine Protected Area (MPA). Back In 2013, when the existing MPA sites were being selected, LINK member the Marine Conservation Society (MCS) proposed part of Loch Carron as a MPA. At workshop 4 of the MPA designation process, Loch Carron was under consideration in its entirety, though not taken forward in favour of sea lochs with more protected features, including five with flame shells. 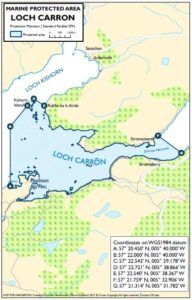 Given how fragile flame shell beds are, that we had collectively advocated for all six MPA locations containing flame shells to be designated as MPAs, and the conclusive results from the recent scientific surveys, we support the addition of Loch Carron to Scotland’s developing MPA network. Given time, we are hopeful that the beds will recover, though the report produced by SNH suggests that it could take many years for the beds to fully recover. Effective management and ecological monitoring of the site will be essential to support the recovery of the damaged habitat and improve our understanding of the wider ecological role these habitats play.

What does this mean for our seas?

MPAs alone were not designed to deliver spatial and sustainable management of fishing activity. As we have long advocated, modernised inshore fisheries management measures are urgently required for our wider seas. The recent event in Loch Carron brings into sharp focus how important it is to have specific measures to manage fisheries and other marine activities outside of MPAs to ensure the proper protection and stewardship of Scotland’s marine biodiversity throughout our seas. As such, we also welcomed Scottish Government’s commitment to begin work to ensure that fisheries do not significantly impact the national status of flame-shell beds and some other Priority Marine Features (PMFs) outside the MPA network. This is in keeping with requirements in Scotland’s National Marine plan, Scotland’s Marine Nature Conservation Strategy and the biodiversity duty of Scotland’s Nature Conservation Act as well as independent scientific advice. 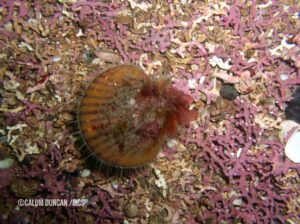 The need for a fresh legislative framework is recognised in the Scottish Inshore Fisheries Strategy 2015 and the current programme for Government includes a welcome commitment to develop an Inshore Fisheries Bill. An effective and progressive management approach that integrates inshore fishery management into the National Marine Plan and developing Regional Plans is paramount. This will not only to protect vulnerable Priority Marine Features (PMFs) and critical fish and shellfish habitats, but also to help address other issues such as competition for space and gear conflict. As a prelude to this, we also welcome the recent announcement regarding gear management trials.

We hope that the lessons learned at Loch Carron will lead to further proactive measures to ensure appropriate protection for PMFs, as well as critical fish and shellfish habitats throughout Scotland’s seas, encourage the completion of Scotland’s developing MPA network, and further highlight the potentials benefits of spatially managing marine activities.

Images from the SNH survey

Independent research paper on the Principles of Scallop Fisheries management around the UK: Beukers-Stewart BD and Beukers-Stewart JS (2009). Principles for the Management of Inshore Scallop Fisheries around the United Kingdom. Report to Natural England, Scottish Natural Heritage and Countryside Council for Wales. Marine Ecosystem Management Report no. 1, University of York, 58 pp. Available at: http://eprints.whiterose.ac.uk/105473/1/Beukers_Stewart_Beukers_Stewart_2009_Scallop_Fisheries_Management.pdf