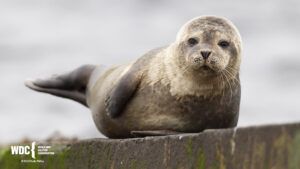 Scotland’s salmon farming industry has been the focus of much attention over the last few years, and most recent developments have focused around its impact on marine mammals.

In 2020, LINK welcomed the introduction of the Animals and Wildlife (Scotland) Act, which included a ban on licensed shooting of seals to protect farmed salmon within aquaculture facilities.

Also included within the Act (Section 15) was a requirement on the Scottish Parliament to report on the aquaculture sectors use of Acoustic Deterrent Devices (ADDs). ADDs emit sound with the intention of scaring away seals, but they also impact non-target species, specifically cetaceans (i.e. porpoises, dolphins and whales).

Widespread use of ADDs has increased in Scotland in recent decades. The lack of oversight or regulation of ADD use throughout this period is concerning. Additionally, due to the recent ban on seal shooting, there are concerns that the reliance on ADDs to control seal predation will increase.

There is clear evidence that ADDs can cause injury, disturbance and displacement of harbour porpoise and minke whales, which was confirmed by the Scottish Parliament report. The report suggests that further research on ADD use is required, and highlights the need for further investigation into non-lethal alternatives.

Subsequently, the Scottish Government published a second report on non-lethal seal control options, which provides a comprehensive review of alternative, non-acoustic methods. The report recommends that the use of anti-predator nets and/or new netting material should be prioritised.

Indeed, some members of the aquaculture industry have already taken the step away from ADDs (e.g. Scottish Sea Farms) and adopted tensioned nets, anti-predator nets and more robust netting materials. This move has led to a reduction in seal predation in some areas. 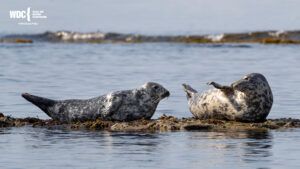 We are very much in the midst of discussions around the use of ADDs in salmon farming. Recently the Scottish Salmon Producers Organisation (who represent all salmon farming companies in Scotland) announced that they would no longer use ADDs that “may have been considered to cause disturbance to European Protected Species” (i.e. cetaceans). LINK very much welcome this development.

However, it remains unclear whether this means some types of ADD will be continue to be used. ADD technology is advancing rapidly and newer ‘acoustic startle devices’ operate at a lower frequency than traditional ADDs. This may lessen impacts on harbour porpoise but result in greater impacts on minke whales. Clarity around the industry’s intention to use any acoustic devices is paramount.

Both the recent decisions on banning seal shooting and stopping the use of ADDs have largely been influenced by the upcoming US Marine Mammal Protection Act. The US MMPA requires all countries that import seafood to the US (including farmed salmon) apply the same standards placed upon US fishermen, including those regarding the incidental killing or incidental serious injury of marine mammals for fisheries purposes.

LINK is concerned that industries operating in Scotland are looking to welfare and conservation standards of other nations to guide best practice in Scotland. It is now three years since two parliamentary inquiries into salmon farming in Scotland took place. Concerns around ADD use were raised and to date little action on the issue has taken place. LINK would like to see the Scottish Government take a leading role and show strong commitment to preventing further use of any acoustic devices around salmon farms.

It is LINK’s view that all acoustic devices designed for scaring seals should be urgently phased out in favour of benign alternatives.  Some salmon farmers in Scotland have already proven that non-acoustic and non-lethal alternatives can be effective in deterring predators. Therefore, LINK believe that the Scottish Government should, in line with its own report, prioritise the wide-scale deployment of these alternative methods.