Should we still be scallop-dredging in Luce Bay? 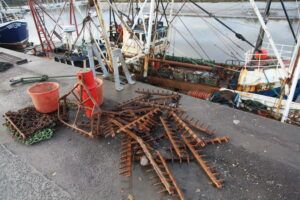 In Wales, there has been public uproar about scallop dredging in Cardigan Bay Special Area of Conservation, but here in Scotland measures have been recently approved that allow scallop dredging to continue seasonally in areas of Luce Bay SAC. Our campaigners explain why – and what we are doing about it….

Luce Bay – a large south-facing Bay on the Galloway coast – is often referred to as comprising a ‘mosaic’ of habitats. It’s a pleasing analogy; sandbanks, soft sediments, boulders and reefs, all combining to support an amazing complexity of sea life – the ecosystem mosaic. This variety, complexity and quality is the reason this ‘large shallow inlet and bay’ is ‘special’, and was formally badged a Special Area of Conservation (SAC) in 2005.

On the 8th February 2016, the Scottish Parliament passed long overdue spatial measures to regulate fishing in Luce Bay (a seasonal closure meant that dredging could continue across the Bay). The measures look like this: 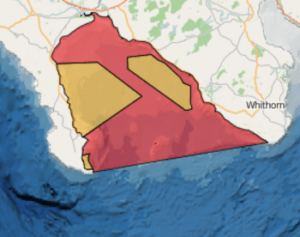 There is a prohibition on bottom-towed fishing (red), but scallop dredging can continue each year from November to February (in the orange areas). The measures (described in a Fishing Order) were passed by ‘negative instrument’ – a perhaps fitting legal term for a basic and binary parliamentary procedure which commits Parliamentary Committees to either supporting laws or moving to annul them in their entirety. It’s aye or no: there is no in between. All the discussion, debate and deliberation was done before via open consultation, but away from the perhaps more public Holyrood glare of our time-limited MSPs.

We have consistently urged Marine Scotland and our political representatives to introduce a site-wide prohibition on bottom-towed fishing in Luce Bay and Sands SAC. The zonal approach is not in our view an artful compromise. It leaves two large zones in the middle of Luce Bay, and a smaller zone in the outer most sensitive part of the bay, which not only makes it quite difficult to enforce, but is also based on questionable assumptions.

Luce Bay is open to scallop dredgers during the winter months. Scottish Government figures put the annual value at approximately £190,000 GVA, although this was disputed during the consultation process. This was deemed to affect 0.54% of revenues of the fishing vessels dredging Luce Bay, as the fleet mainly dredges elsewhere, steaming out past Luce Bay to open offshore waters between Scotland and Northern Ireland.

The debate was broadly one about degree of precaution. Our members, and many others, contend that we cannot rule out the possibility of a likely significant effect of scallop dredging on the ecological function of the site, described in legal terms as “site integrity.” The Scottish Government agreed that this could not be ruled out, so commissioned an Appropriate Assessment to ascertain whether the spatial management proposal would adversely affect the ‘site integrity’ of Luce Bay.

The resulting Appropriate Assessment determined that a certain proportion of sedimentary habitat could be mechanically dredged for four months a year without affecting site integrity or compromising the achievement of favourable conservation status. In other words, dredging can continue within parts of the SAC. We remain of the view that with zoned seasonal access to scallop dredgers, there remains the possibility of a likely significant effect on the site.

This has made Luce Bay something of a test case. After Loch Creran SAC, It is the second SAC in Scottish waters where zonal management for bottom-towed fishing has been introduced using a statutory fishing order rather than voluntary measures (such as the Sound of Arisaig SAC). Other SACs (such as St Kilda SAC, Loch Laxford SAC and the Firth of Lorn SAC) have been afforded full protection to bottom-towed fishing.

The rationale for zonal management is complicated, but it boils down to whether the best available evidence for determining whether or not scallop dredging would adversely affect the many components of the mosaic of features within the site was a study done for Dogger Bank. The Scottish Government’s Appropriate Assessment was based largely on an interpretation of ICES advice for the Dogger Bank SAC. We simply do not think Dogger Bank is comparable to Luce Bay. Dogger Bank is offshore in the shallow southern North Sea. Luce Bay, by pretty clear contrast, is a south-facing coastal embayment in the southwest of Scotland comprising the complex mosaic of habitats. Alongside the Scottish Sea Angling Conservation Network, we have written to Marine Scotland to state our concerns.

So although we support the Luce Bay and Sands Fishing Order (this change to fisheries management is better than the status quo), we do query the rationale for the zonal management and will continue to make this case. SNH assessments (Report No. 471) suggest that there is an area of harder ground in the west of Luce Bay which falls within the proposed seasonal mechanical dredging zone. If this is reef, we think it should be protected and we are looking to help survey the area using Seasearch to find out.

In the meantime, we contend that urgent independent monitoring is required to understand the effect of these measures. If further deterioration is taking place as a result of scallop dredging, immediate action could therefore be taken as part of an adaptive management approach.

Boom and bust in Luce Bay?

Dredging is a relatively recent method of harvesting scallops. However, we have been dredging for other molluscs in Luce Bay for well over two centuries. In the 18th and 19th century it was oysters that carpeted our seabed and there were booming fisheries for them around many parts of our coastline. These fisheries used rudimentary spiked dredges powered by oar and sail, and by the late 1800s these fisheries had removed most of these living reefs from the seabed. Oyster reefs in Luce Bay and around Scotland’s coastline have since largely disappeared. The scallop dredge fishery as we know it today is diesel-powered and uses toothed dredges which continue to disturb and modify seabed habitats.