Scotlink/Unlocking the secrets to recovering seagrass in Scotland

Unlocking the secrets to recovering seagrass in Scotland 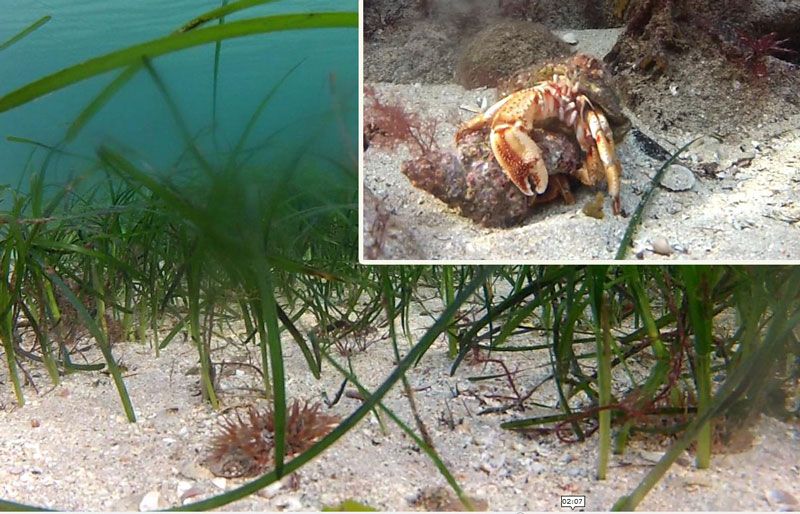 Could interlinked fish and crustacean populations affect the declining health of local seagrass beds? Peter Cunningham of the Wester Ross Fisheries Trust explores the possibility in light of fresh research from across the pond…

Recently I had a snorkel along the shore of Loch Ewe where we tried to re-establish some seagrass in an area where a few years ago a small area of seagrass had disappeared.

Last winter, on the other side of the peninsula by mouth of Loch Gairloch, we found lots of stranded rootlets and fragments of seagrass on the shore at Big Sand; so the idea was to try to see if we could get the cuttings to root along the shore of Loch Ewe. However, despite much effort by Kate Donald, and others who helped to collect the rootlets, I couldn’t see any signs that any of the seagrass cuttings had taken root.

Since then I’ve been wondering whether something in the ecosystem may have affected the prospects of success of re-establishing seagrass. The seagrass bed that was previously in the area by Loch Ewe simply appeared to have died out one winter. We assumed that it had been frosted during a low spring tide. There is still one very small patch of live seagrass a few hundred metres away, demonstrating that it can still live in the area. But even here the seagrass is thin (I looked at it during my recent snorkelling mission), and it almost seemed as if the macro-seaweeds are moving into the area where the seagrass grows.

A recent article featured on the BBC highlighted a study about otters, crabs and seagrass. It shows how complex the ecosystem can be: research showed that sea otters were eating the crabs which prey upon small invertebrates in the water; these invertebrates had been eating a type of algae which grows on the leaves of the seagrass, shading them from sunlight and therefore causes the seagrass to die back. A complex chain of events indeed, but in simple terms it suggests that if there are more crabs, there will likely be fewer invertebrates to slow the growth of algae.

During my recent snorkelling trip I saw many shore crabs over the seabed where the seagrass grew, some of which had dug burrows into the sand.

In Loch Ewe and other sea lochs there were formerly many more fish including large skate which I think may have been a major predator of crabs. Could there be a link to the decline of seagrass beds?

I’m very interested to learn more, and maybe have another go at restoring seagrass beds, both here and elsewhere within the possible Northwest Sealochs and Summer Isles [Wester Ross] MPA.

If there are divers or anyone else interested in exploring the loch or other nearby inshore areas and collecting more records, you can contact Peter Cunningham at the Wester Ross Fisheries Trust here.