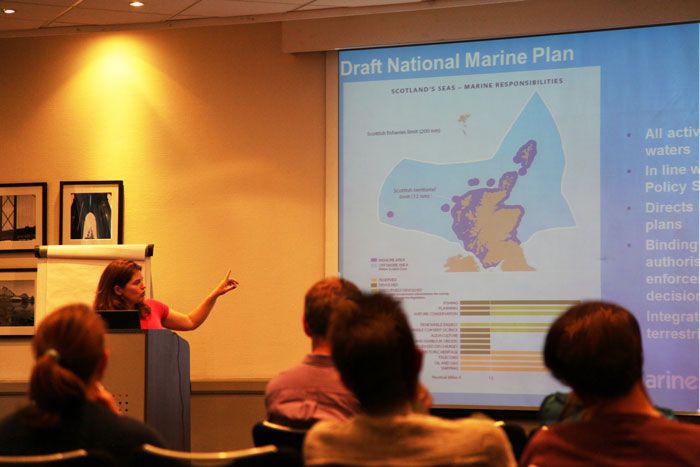 It was an unlikely venue. In a plush, carpeted function suite of the Radisson Blu hotel in the centre of Scotland’s capital and amidst the countless shows of Edinburgh’s famous Festival, a very different event was being performed by the Scottish Government…

Monday 19th August saw the first of Marine Scotland’s (the Marine Directorate of Scotland’s civil service) national presentations to showcase its consultation ‘Planning Scotland’s Seas.’ It had the informal format of a drop-in session, where anyone could wander in – escape the Festival scrum – and talk directly with marine planners, scientists and policy-makers and then watch a short presentation followed by a Q&A.

A shared resource
Make no mistake, this is a major initiative: to create a National Marine Plan that will guide the development of a new network of Scottish Marine Protected Areas and steer sectoral plans for an emerging marine renewable energy industry. It’s difficult to overstate just how important these plans are – they will determine where we site large marine windfarm arrays and fish farm developments, how we protect and recover our sealife and help weigh up the competing demands for space between different sectors in our increasingly busy waters. In short: how we choose to manage our seas, a shared and undeniably public resource. We all have a say in the blue stuff.

But as is so often the case: out of sight, out of mind; if it’s offshore, it’s off the news agenda. And so at this impressive first attempt at democratic engagement on the Royal Mile, just a few hundred yards from Holyrood and the editorial headquarters of a few national daily newspapers, not one single politician or reporter was in attendance.

The Plan is a high level document. It sets out some extremely ambitious targets: to boost annual production of finfish aquaculture by 50,000 tonnes, and to support the marine contribution to generating the equivalent of 100% of Scotland’s electricity consumption from renewable sources. Both of these targets are just 7 years away (2020 once seemed a long way off…!) and are major, aspirational policies surrounded by the very live constitutional context of pre-IndyRef Scotland. These should be discussed in pubs and bus-stops, up and down the country. The National Marine Plan itself has 19 General Policies, each of equal status and, one-by-one, they touch on the interests of probably everyone living in Scotland; fishing, energy production, landscape value, tourism, heritage, river health, coastal planning and species conservation.

Growth in context?
The Plan has the potential to put sustainability and environmental considerations at the heart of planning. Currently, there is significant reference to the expansion of industries across the marine environment and the nebulous concept of “sustainable economic growth” features as an obvious buzzword. However, the National Marine Plan does at least recognise that a good deal of work is needed to actually recover our seas to a better state. A network of Marine Protected Areas is being developed, which includes existing sites, and for which 33 new sites are being consulted on to protect species and habitats that have suffered long-term ecological decline.

Marine Scotland has done a lot of work in pulling this process together. Well over 150 separate documents are being put forward as part of the consultation and many of these documents cite other documents. As David Mallon (Head of Marine Scotland’s Environment Branch) acknowledged: “It’s quite a package of information that we are asking for you to make your way through.”

And yet in these documents are the legal foundations of proposals that will shape the way we protect and steward our seas as we harvest and extract value from them. The MPA process differs from England, where stakeholders helped suggest sites and their boundaries, and Wales, which was more top-down. In Scotland, much of the evidence was gathered by marine scientists to enable people to better comment on more ‘concrete’ marine conservation proposals, whilst stakeholders could also input their own science and ‘third party’ MPA proposals, so a reasonable mix of top-down and bottom-up.

During the afternoon, the Scottish Government’s scientific advisors (Scottish Natural Heritage and Joint Nature Conservation Committee) had been on hand to answer questions and introduce the plans. Then at 6pm, if you had been able to plough your way through the throng of Festival touts outside on the Royal Mile, you could have watched a 40 minute presentation by three senior civil servants each outlining a component of the consultation. Planning slides do not necessarily make for enthralling viewing, but in a Q&A afterwards, some different perspectives started to emerge, sparking interest  from the urban heart of Edinburgh.

“Why, when choosing sites to consider for Marine Protected Areas, did the Government select from areas that are Least Damaged Most Natural [official terminology for reasonably pristine bits of sea],” asked one person. “Surely the point is to help areas that have been damaged.”

“What are other countries doing in the seas adjacent to ours? What is the international context?”

“When and how will the impacts of on-land grid connections for these renewable energy plans be assessed?”

The questions were handled directly and with knowledgeable balance by the Scottish Government officials. It is clear that this plan cannot be all things to all people and there will be some choices ahead. The policy chiefs were at pains to point out, for example, that the Marine Protected Areas were not about creating No Take Zones, but did explain that most will require some sort of fisheries management. “Some may actually require to be closed to fishing activities, but they are not being designed in the first place to create No Take Zones.” It was an important point, as MPAs have often been the source of concern from fishermen – in fact MPAs are being designed to protect and enhance the marine biodiversity, which can have the secondary benefit of supporting key life-history stages for some commercial fish species. Marine Scotland’s David Mallon was optimistic that there is a lot of scope for “win-wins,” where the management for one interest will benefit that of another sector.

Mass engagement
Real democracy is messy: views need to be expressed, feedback given, knowledge shared. This event was an effort to promote that conversation and an opportunity for people to learn about Scotland’s amazing marine resource. The event featured pictures and video of deep sea sponges off the coast of Orkney and amazing burrowed mud habitat in the North Sea, not to mention the stunning reefs in the sea lochs of the West coast.

Last night’s presentation was not exactly stowed out – and as an exercise of mass engagement, it could not have been said to be a triumph. I counted about 40 people in the room for the presentation, but it was the first one of over 30 similar events planned throughout Scotland over the summer and many of them will be held in places where people feel a keener connection to the sea and all it provides.

So although the mainstream media likes to follow political agendas and report on the latest initiatives, for the canny journalist, in the  next few months a more interesting story may emerge – how we, the Scottish people, want to manage our sea.