Scotlink/What news for our seas in the Programme for Government?

What news for our seas in the Programme for Government? 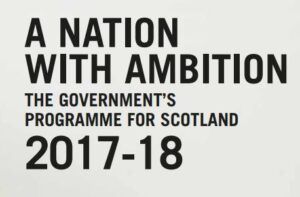 Scottish Government recently announced their Programme for Scotland for the next year. With the government committed to reaching the Aichi target to halt biodiversity loss by 2020, and developing a network of coherent Marine Protected Areas (MPA), we expect this to be a busy year to keep Scotland on track. There were many welcome commitments this week, including the long-hoped-for commitment to introduce a Deposit Return Scheme for drinks containers, as well as commitments to increase protection for Priority Marine Features outside of MPAs, evaluate options for a deep sea marine reserve and develop a programme of research on blue carbon stores.


But what does this really mean for our seas?

Tapping into Scotland’s Blue Carbon
The programme includes a welcome commitment to create a research programme on Scotland’s blue carbon stores – that is those habitats and species, such as seagrass and maerl beds, that lock up carbon. Getting a better understanding of how much ‘blue carbon’ is stored in our seas, where and how this happens, will help us to ensure the potential for these healthy marine and coastal habitats.

Increasing protection for PMFs outside of MPAs
Following the incident in Loch Carron earlier this year, where scallop dredging damaged a flame shell bed, the programme also outlines welcome plans to improve the protection given to Priority Marine Features (PMFs) outside of MPAs. We need to make sure these nationally – and in some case globally – important species and habitats are adequately protected throughout Scotland’s seas. Together with increasing research and action on blue carbon, this could be a potential win-win for biodiversity and climate.

Exploring options for a Deep Sea National Marine Reserve
The Scottish Government also announced plans to evaluate options to create a deep sea national marine reserve. We look forward to hearing more about this and how it can help to safeguard some of Scotland’s amazing deep sea species and habitats, such as cold water corals and deep-sea sponge fields, for which Scotland has a considerable European proportion, that are vulnerable to disturbance, and very slow to recover.

While these measures should ensure greater protection for marine species and habitats throughout our seas, further work is urgently needed by Scottish Government to progress Scotland’s MPA network. Fisheries management measures are needed in remaining inshore MPAs that did not feature in the first tranche of fisheries orders for higher-risk MPAs that came into force in April 2016. We also we await consultation on four nature conservation Marine Protected Areas urgently needed for basking shark, minke whale, Risso’s dophin as well as other species and habitats. JNCC and SNH provided formal advice for these sites in late 2013, and the evidence to support the significance of these sites as globally important ‘hot spots’ is increasing. Additionally the 15 proposed Special Protection Areas consulted upon in 2016 and early 2017, need to be classified for marine birds as soon as possible. 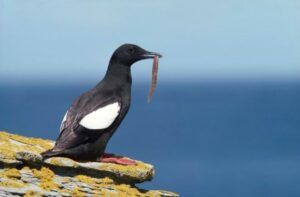 Reviewing Marine Planning
Within the next year, Scottish Government will also be reviewing Scotland’s National Marine Plan, reporting back to Parliament by the end of March 2018. This is an opportunity to ensure the Plan provides a workable framework to guide sustainable use of our seas into the future.

Significant steps to reduce marine litter
Amidst the programme there was some great – and long hoped-for – news for our marine life, with the announcement that Scottish Government will introduce a deposit return scheme for plastic bottles, cans and glass bottles. The commitment to DRS, that has already been proven to work in other countries, follows the hard work by the Have you got the Bottle coalition, including Save Scottish Seas members the Marine Conservation Society – who helped organise a busy programme of campaign activities – RSPB Scotland, RZSS, Scottish Wildlife Trust and WWF. Combined with plans to investigate a charge on disposable coffee cups, as well as a commitment of £500,000 to begin addressing litter sinks around Scotland’s coastline and to develop policy to address marine plastics, these measures will surely help turn the tide on marine litter.

Though we welcomed the above measures, we were surprised not to see plans to progress an Inshore Fisheries Bill despite commitments in the 2016-2017 Programme for Government. As the Scottish Inshore Fisheries strategy (2015) makes clear “21st century fisheries management needs 21st century tool”. Reform of our inshore fisheries is urgently required to bring Scotland’s fisheries management into the 21st Century.