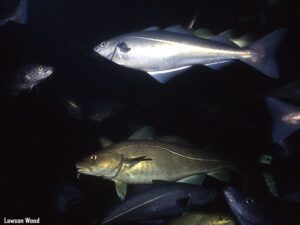 You may remember we have been looking at case studies of where marine protected areas (MPAs) have resulted in clear improvements to biodiversity and increases in stocks of commercial fish, as we think about how Scottish MPAs should be managed to try and deliver the same benefits. Our first case study was on a series of MPAs in Norway, along the Skagerrak coast, designated for the protection and recovery of lobster and cod. In just four years, there was a clear increase in the size and number of lobster and cod found within the protected area, compared to a non-protected control site.

The researchers have continued to study the cod in these MPAs, this time looking at their chances of survival under protective measures and the spilllover effects (movement of higher numbers and larger sized fish from the MPA to surrounding waters). The results found that survival rates were higher within the protected area than in fished areas, and this was proportionate to the size of the fish (i.e. larger fish have higher survival rates) – and given that fish tend to reach larger size within protected areas anyway, it’s a benefit on top of a benefit! Spillover of cod from the MPA outwards was also evident and the researchers suggest that local emigration from within the protected area exceeds immigration, particularly for larger fish.

The changes to cod and lobster populations within these MPAs have occurred in just nine years since they were designated, with increases in the size and number of lobster detected after just one year. This series of studies demonstrates several things:

Read our other case-studies about the benefits of MPAs