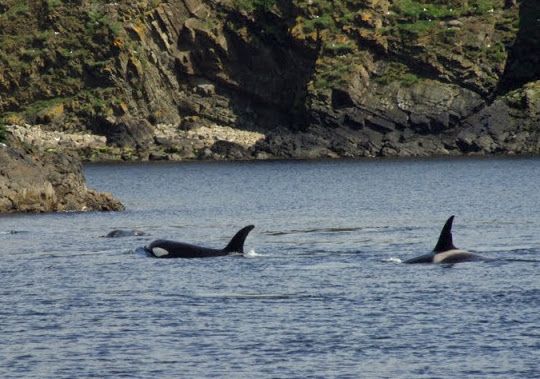 Orcas visiting the coastal waters of Fair Isle in June 2011

The people of Fair Isle are calling for better protection of their local marine environment. Nick Riddiford, chair of the Fair Isle Marine Environment and Tourism Initiative explains why a Marine Protected Area would help safeguard their sea, and their community.

For the last 24 years the Fair Isle community, concerned at steady and unremitting damage to its marine environment, has been active in trying to reverse the process.

This has culminated in a proposal to the Scottish Government for a Marine Protected Area for Fair Isle waters, submitted to the Government’s Marine Scotland in December 2011. The proposal has the backing of every person on the isle, as a healthy marine environment underpins the social and economic well-being of the isle.

The isle has been occupied continuously for at least 2000 years and archaeological investigations have demonstrated that there were people living here 5000 years ago. Fair Isle is 42 kilometres (28 miles) from the nearest land in any direction. A community would not have survived without using its resources in a sustainable manner. It was not in a position to use up its resources, then go and exploit resources elsewhere. That remains the situation today.

The seas around Fair Isle have always played an essential part in community life and continue to do so. We recognise that safeguarding the resource also safeguards the future of our island. That resource now includes the public, drawn to the isle by its marvellous wildlife, scenery and maritime culture. We owe it to them. We owe it to our children.

In 1995 the community formalised its efforts through the Fair Isle Marine Environment and Tourism Initiative (FIMETI), an initiative led by the islanders in partnership with Fair Isle Bird Observatory and the National Trust for Scotland.

FIMETI, perceiving no action from other bodies, set out to provide a catalyst for urgent progress towards proper, sustainable management of the Fair Isle marine resource. It has engaged in a plethora of activities, including an international sustainable resource management project, the production of a policy report Safeguarding Our Heritage – the Fair Isle Marine Resource, participation in the Scottish Government’s Scottish Sustainable Marine Environment Initiative (SSMEI Shetland pilot study) and much more. But it is yet to achieve its primary aim of bringing a sustainable management programme to a resource which the community sees as crucial to its long-term development and well-being.

Despite this lack of achievement, the community identifies a new opportunity with the prospect of a network of Marine Protected Areas in Scottish waters. Fair Isle’s seas remain rich, despite a marine environment subject to continued enormous pressure. In addition, the isle has a series of facilities which would make it an ideal site for a Demonstration and Research MPA. In this way it could act as a pilot site for testing appropriate management measures and provide a model for coastal communities throughout Scotland.

An MPA would also meet the Scottish Government’s obligation within the Council of Europe. Fair Isle has held the Council of Europe Diploma since 1985, one of just two sites in Scotland. In 2010 a condition was signed by the Council’s Committee of Ministers – representing all 47 participating countries – that the Scottish and UK Government’s should use their powers to establish a protected marine area for Fair Isle. If this is not done, Fair Isle will lose its Diploma and Scotland one of its only two sites.

FIMETI remains the community’s voice on the issue. Just about everyone, from school children upwards have been involved in FIMETI activities over the years, including the preparation of the MPA proposal. This is clearly demonstrated in a series of newsletters entitled Making Waves. The latest Making Waves (Issue 10) has just been published. It has been described as “a good read” but also displays the range of maritime activities, and qualities, which makes Fair Isle such a special place. We invite you to read it here