The Clyde Sea Sill MPA stretches from the Mull of Kintyre to Corsewall Point on the Rhins of Galloway. Below the surface in this region, the water shallows dramatically where the North Channel (between Scotland and Northern Ireland) becomes the Firth of Clyde at a distinctive sill on the sea bed. The sill causes the much cooler, saline waters of the North Channel to mix with the warmer, less saline waters of the Clyde, leading to the creation of a front.[1]

A consultation on proposed management measures for this site is expected later this year. 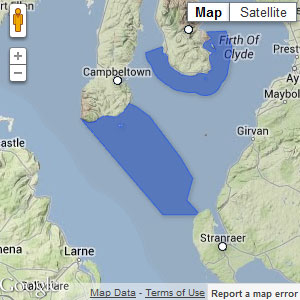 This site was designated in 2014. Save Scottish Seas campaign members assessed the Scottish Government’s MPA proposal for this site as part of its response to the 2013 MPA network consultation.

We support the conservation objectives for the protected features within the Clyde Sea Sill possible MPA of ‘conserve’ for all features.

In addition to black guillemot, other seabird species must be added to the list of species protected in the Clyde Sea Sill MPA . The Sanda Island SSSI, which sits within the possible MPA, is designated for black guillemot, Atlantic puffin, shag, great black-backed gull, fulmar, storm petrel, razorbill, guillemot, Manx shearwater, cormorant and black-legged kittiwake. Of these 11 species, five are classed as being in ‘unfavourable’ condition within the Sanda Island SSSI.

The possible MPA is also within foraging distance of Ailsa Craig SSSI/SPA, designated for Northern gannet (23,000 pairs 8.7% of the world biogeographic population) and lesser black-backed gull (1,800 pairs, 1.4% of the total Larusfuscus greallsii biogeographic population). It regularly supports 65,000 seabirds including nationally important populations of the following species: common guillemot (3,350 pairs, 0.5% of the GB population), black-legged kittiwake (3,100 pairs, 0.6% of the GB population) and herring gull (2,250 pairs, 1.4% of the GB population).These protected sites show the importance of this possible MPA for seabirds.RSPB tracking data (currently unpublished) collected as part of the FAME project. shows black-legged kittiwake use the Clyde Sea Sill possible MPA. Given the high, localised seabird populations, the location of the possible MPA in relation to foraging range, and the decline of seabird populations throughout Scotland, this Clyde Sea Sill possible MPA should be designated for seabird species.
The possible MPA must protect the areas where these birds forage. As is the case with terrestrial sites, the linkages and collaborative protection offered with a combination of national and international designations must be employed in the marine environment. Only with SPAs and MPAs for seabirds will adequate protection be secured.The Clyde Sea Sill possible MPA region is also known to be used by bottlenose dolphin, harbour porpoise and basking shark. These species should be taken into account when developing management measures for this site.

We recommend that further work be carried out to better understand the effects of the front in the Clyde Sea Sill possible MPA. Oceanic fronts should be considered as ‘proxy’ features suggesting the presence of other species and habitats. The effect of the front can be to create nutrient rich conditions in the surface water, beneficial to different marine organisms.

The consultation document states “fronts can concentrate nutrients and plankton creating feeding hotspots for fish which in turn attract other higher marine predators”. The species that benefit from the effects of the front, particularly including mobile species, should be afforded protection where qualifying criteria dictate.

Unpublished data from the FAME project also shows the Clyde Sea Sill is an important foraging location for a number of seabirds from colony in Rathlin, Northern Ireland.

Renewables
Given the proximity of the lease site to Sanda Island SSSI (1.7 Km approx.) and Ailsa Craig SPA/SSSI (30.3 Km approx.), and the foraging habits of many of the birds we recommend that the lease site be developed with a condition that seabird monitoring work is carried out to assess the impact of the structure.
Given the potential effect renewable developments can have on black guillemot, we recommend that any additional renewable developments are only granted permission within the possible MPA once sufficient monitoring work of the lease site is completed.
Proposals from holders of the tidal power lease, OceanFlow Energy, are for a 1/4 scale Evopod device. This is a floating tethered device with a submerged turbine with open rotating blades.. Wave and tidal stream devices with rotating turbines are likely to pose a greater threat to birds, as well as other mobile species such as basking sharks and cetaceans, than those without such blades.
McCluskie et al. (RSPB 2012) point out that “While in many ways analogous to both wind turbines and the propellers of ships and boats, the turbines of wave and tidal devices spin at considerably slower speeds, at or below 12 ms-1”. This reduces the likelihood of injury to birds.
There is a risk to black guillemots from this development, “auks Alcidae sp, cormorants Phalacrocorax sp. and divers Gavia sp. are most vulnerable to collisions due to their tendency to consistently dive to depths where moving components are found, and also to exploit habitats suitable for tidal stream turbine installations.” (Waggitt & Scott 2013 ). However, given that seabirds are long lived and are able to acquire knowledge of foraging areas, the impact will most likely be short term.

Monitoring work will help expand knowledge of interactions between wildlife and renewable developments to better inform developers, the Government (and associated bodies), as well as conservation organisations.
If this development is shown not to have an effect on seabirds and other marine species it could serve as a good example of how renewable developments can exist within a protected area and have no impact on the features for which the site is designated.
Other factors to consider are the moorings and cables used in renewable developments. These are particularly important considerations for foraging birds and for basking sharks and minke whales, that can become entangled. Entanglement of minke whales is a considerable issue in Scottish waters, where half of stranded minke whales show signs of having been entangled.) is within the possible foraging range for this species and should be considered.

Fishing
LINK supports the management option to remove or avoid set nets from within the site, and throughout the site. Monitoring and compliance of set net activity in this site will be of paramount importance to ensure the conservation objectives are achieved. Should a fishing practice thought to cause seabird bycatch or mortality commence, recommendations from the EU’s Action Plan for reducing incidental catches of seabirds in fishing gears must be adopted (COM(2012) 665).
We agree that reducing or limiting pressures from demersal mobile/active gear should be considered to meet guidelines on circalittoral sand and coarse sediment. This should be fully discussed with skippers in the area and other stakeholders (including environmental and wider community stakeholders, not just fishing interests).
Guideline 2b in the assessment paper for this site lists a number of the species which are present due to the circalittoral and coarse sediment. We seek clarification on whether management options have considered any effects activities will have on these species as well as the feature.
Given the close association between black guillemot and kelp beds (and other habitats rich in algae), LINK suggests that this MPA is considered in the parallel draft seaweed policy statement consultation, and particularly with regards to guidance developed for the harvest of wild seaweed.

Socioeconomic Assessment:
The potential for seabird and wildlife tourism in this region is significant. Throughout summer 2005, an RSPB Aren’t birds brilliant project staffed by volunteers showed people seabirds from boats on the Firth of Clyde. The volunteers provide information on the birds, their conservation and the management of marine areas. RSPB Scotland staff met with approximately 2,000 passengers sailing around Ailsa Craig, on the world’s last ocean-going paddle steamer The Waverley, and on the Caledonian MacBrayne Ardrossan-Brodick (Arran) commercial ferry service. (Watched Like Never Before, RSPB ).

The potential value of the Clyde Sea Sill possible MPA to divers and sea anglers has been estimated at £7.1 to £14.9 million based on willingness-to-pay measures (Kenter et al., 2013) . Kenter et al. also found important emotional and well-being benefits associated with the Clyde Sea Sill possible MPA, with divers and anglers responding to questionnaire scoring >4 (out of a maximum score of 5) for engagement, therapeutic, spiritual, transformative and social wellbeing indicator values.