Loch Creran is a small but remarkable sea loch on the west coast of Scotland to the north of Oban. Carved into the landscape by glaciers during the last ice age, the loch has four deep basins separated by rocky sills. The conditions change from the entrance of the loch to its head. The bottoms of the basins are deep, dark and still while the currents are accelerated over the shallow sills at Eriska and Creagan. These two areas of rapid tidal flow supply the necessary food and aeration for the formation of flameshell beds. The largest lies to the south of the Eriska Narrows at North Shian, with the smaller found at the western entrance to the Creagan Narrows. [1]

The Loch Creran nature conservation Marine Protected Area was designated in 2014 to conserve flameshell beds, to complement the already existing Loch Creran Special Area of Conservation (SAC) for the protection of reefs.

The site is particularly notable for biogenic reefs of the calcareous tube-worm Serpula vermicularis, which occur in shallow water around the periphery of the loch. This species has a world-wide distribution but the development of reefs is extremely rare; Loch Creran is the only known site in the UK to contain living S. vermicularis reefs and there are no known occurrences of similarly abundant reefs in Europe. Biogenic reefs of the horse mussel Modiolus modiolus, also confined to the shallow sublittoral, occur in the upper basin of the loch. The biogenic reefs increase habitat complexity and are colonised by an abundant and diverse faunal assemblage, including bryozoans, ascidians and sponges. Localised areas of bedrock reef, which support further species-rich assemblages, are also included within the site [2].

This site now has fisheries management measures in place.

Read our response to the proposed management measures:

Save Scottish Seas campaign members have assessed the Scottish Government’s proposed management measures for this MPA part of its consultation response.We support the prohibition of suction/hydraulic dredging from this SAC/MPA and we support the continuation of creeling, providing it is operated at environmentally sustainable levels and an appropriate assessment is carried out to determine its potential impacts on the features. We also support the prohibition of trawling from the flame shell bed and the continuation of the existing management measures. We do not support the continuation of trawling throughout the rest of Loch Creran as, without data on the effort of current trawling activity, there is no indication as to what the potential impacts on the marine environment
would be. The loch is very constricted and, given the uncertainty about the distribution of habitats
and Priority Marine Features and possible impacts of sedimentation on protected feature status, it is
not sufficiently precautionary to permit any trawling within the loch. We would prefer a more
precautionary prohibition on mobile demersal gear throughout the site until such information is
made clear.The consultation document states that for Loch Creran ‘…the current level of trawl activity would be unlikely to have a significant negative effect on the environment.’ Considering the designation of this site as both SAC and MPA, current trawling activities should be subject to a full environmental impact assessment and/or Appropriate Assessment (under the Habitats Directive) before a permit scheme for trawling can be considered, to determine more accurately what degree of impact there is to benthic features. We also seek a more precise definition of how an ‘unlikely significant negative effect’ has been assessed and quantified, and how it will be measured should trawling continue at current levels within this site. Any unquantified statement regarding the level of a potentially damaging activity within a protected area must be translated to the level of impact on the protected features in order to determine appropriate management measures.Yes, at present we support the prohibition of mobile demersal fishing gear use and the continuation of static gear use throughout Loch Creran SAC/MPA (Approach 2). As detailed in our response to Q4 (above), it is difficult to agree with the continuation of current levels of trawling within this site without having an indication of how high those levels are, or exactly where they are taking place, and we advocate the precautionary principle in this situation. We support sustainable/non-damaging levels of creeling, subject to Appropriate Assessment and monitoring of its impacts on the seabed and PMFs.We agree with the management advice to remove/avoid pressure from mobile demersal fishing gear for serpulid reefs, horse mussel beds and flame shell beds. To avoid the risk of any secondary impacts to these delicate features (such as smothering from stirred up sediment), we support Approach 2, the prohibition of demersal mobile gear throughout the site. As stated in (6), we would support an environmental impact assessment/Appropriate Assessment of current levels of fishing before we would consider whether a permit scheme for the existing operator is appropriate. Loch Creran is a small water body with a number of highly sensitive benthic features, including populations of global importance, so it is possible that even a low amount of trawling effort could do a relatively large amount of damage. We note the official status of the reefs is ‘Unfavourable recovering’ although anecdotal evidence, yet to be confirmed, suggests there are outstanding concerns about the conservation status of the serpulid aggregations. We urge the Scottish Government to carry out further research in this site to assess the condition and if there have been declines in status, to determine the reason why. If the serpulid reefs are declining in health, this could suggest the current management regime is not sufficient for the conservation of the feature
and must be reviewed and updated. To ensure progress toward Favourable Conservation Status and site integrity and to prevent further deterioration, we support approach 2.
Loch Creran holds a great deal of social and cultural importance to the local community; its rich marine biodiversity and attractive scenery draws recreational marine users (such as divers and kayakers) and tourists to the area. It is a popular area for wildlife watching, as it supports healthy populations of coastal birds, seals, otters and occasionally porpoises or dolphins. There are also a number of local community-based conservation initiatives which reflects the importance of the Loch’s coastal and marine environment and the need to ensure its good environmental condition.
The local socio-economic importance of this site should be considered alongside commercial fishery and fishery displacement impacts.

Read our response to the 2013 consultation to designate the site as a nature conservation MPA: 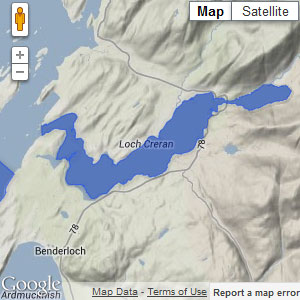 Save Scottish Seas campaign members have assessed the Scottish Government’s MPA proposal for this site as part of its consultation response.LINK supports the designation of the Loch Creran possible Nature Conservation MPA for the protection of flame shell beds and geodiversity feature, quaternary of Scotland. The boundary and area of the possible MPA is fully supported. This possible MPA (overlaying the existing SAC for biogenic reefs) will be important to protect and enhance Serpulid aggregations, Flame shell beds and Horse Mussels. The area has already been declared an SAC and management will need to refer to, and align with, the objectives of the SAC. The congruence of the boundaries will simplify this.

Without better resolution data of fishing effort, it is impossible to determine whether the extant distribution of flameshell beds is likely to have been in any way constrained by pressure to date. Furthermore, the modelled distribution west of Creagan narrows is surprisingly small and, based on flameshell distribution in other sea loch narrows, might be expected to be larger in extent given the chance to recover. On the basis of lack of pressure data and expected potential extent, we would prefer a conservation objective of ‘recover’ for flameshell beds. 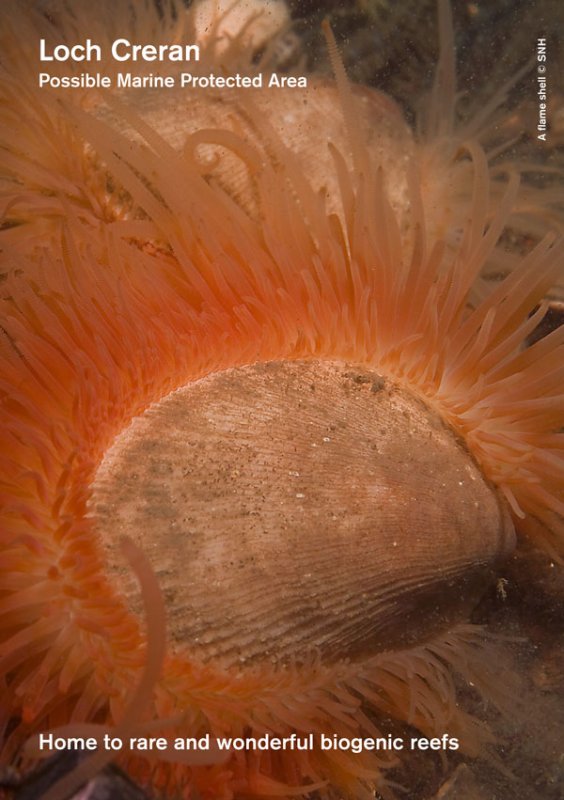 The management options to remove or avoid impact to these benthic communities are supported. We support and encourage designation of zones prohibiting all forms of disturbance by mobile and static gear, diver-operated hydraulic methods and expansion of new aquaculture ventures. As well as the direct impact of finfish aquaculture we would draw attention to the need to limit overall nutrient input to a loch with such limited circulation as Loch Creran as this is particularly likely to affect communities in the Shian Narrows.In the absence of detailed information relating to the impacts of aquaculture on proposed protected features within an MPA it is imperative that the precautionary approach be applied. Discussions with finfish farming interests cannot be used as a proxy for specific, detailed information and where doubt exists management measures must be precautionary.

The area is hugely important for marine tourism, including sailing, angling and diving. The assessment in the Loch Creran partial BRIA does not adequately consider this nor the potential for expansion or synergy with the possible MPA. The potential value of the Loch Creran possible MPA to divers and sea anglers has been estimated at £6 to £12.7million based on willingness-to-pay measures (Kenter et al., 2013) . Kenter et al. also found important emotional and well-being benefits associated with the Loch Creran possible MPA, with divers and anglers responding to a questionnaire scoring >4 (out of a maximum score of 5) for engagement, therapeutic, transformative, spiritual and social wellbeing indicator values.

Loch Creran contains a complex mosaic of rare and vulnerable benthic species, including those designated as SAC features and proposed for the MPA. Overlaid on this is a dense pattern of socioeconomic uses within a very small area. Very careful management will be required to ensure that these are all compatible. Further research is needed to determine the impacts of the existing aquaculture operations remote from their immediate footprint. The interaction between finfish and shellfish aquaculture should also be investigated.

Check out the official documents relating to the Loch Creran MPA on the Scottish Natural Heritage website.