Loch Sunart to the Sound of Jura MPA 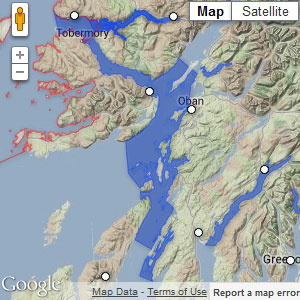 The common skate is the largest skate in the World – it can reach a length of 2.5 m and weigh over 100 kg (that’s 15 stone!). It can be found in waters ranging from 10 – 600 m deep. It has no bones; rather, like other sharks, skates and rays, it has a cartilage skeleton. Skates are an ancient group of fish that first appeared in fossil records about 150 million years ago. [1]

History of this MPA:

Read the our response to the consultation on the nature conservation MPA designation here:

Save Scottish Seas campaign members have assessed the Scottish Government’s MPA proposal for this site as part of its consultation response.We support the designation of the Loch Sunart to Sound of Jura possible MPA for common skate. We understand that common skate are found throughout Scottish waters, certainly off the west and northern coasts and islands, but that the data supporting the Loch Sunart to Sound of Jura possible MPA suggests a core of resident animals meriting area-based protection. However, further scientific study of common skate throughout Scottish waters is urgently needed to find at least one other possible MPA to contribute toward replication for this MPA search feature. Protecting Loch Sunart to Sound of Jura alone will not provide sufficient area-based protection for this rare and vulnerable giant.

The conservation objective of conserve (feature condition uncertain) is supported.

Management Options:
We note that further information on the impact of aquaculture (finfish and shellfish), mooring and anchoring on common skate eggs is needed before management recommendations can be made, therefore think it premature to previously state that ‘No additional management’ will be needed for these activities. On the contrary, additional management may be needed for some or all of these preceding activities if new impact data arises. We support the management options for fishing as presented, particularly the recommendation to remove bottom set-nets and long lines from the possible MPA. We would recommend capping existing bottom-towed fishing effort, until more information is gathered on towed/active fishing gear effort and its interaction with common skate in the area.

Socioeconomic Assessment:
LINK acknowledges the important contribution of the Scottish Sea Angling Conservation Network in bringing this possible MPA to the consultation stage.
This contribution is an excellent demonstration of the high value that communities, both of place and of interest, put on the integrity of the marine environment. It also points to the existence of the non-use value of MPAs that has been largely omitted from the economic assessments.
The potential value of the Loch Sunart to Sound of Jura possible MPA to divers and sea anglers has been estimated at £8.2 to £17.2million based on willingness-to-pay measures (Kenter et al, 2013) . The upper limit for sea anglers alone was £14.3million, second only to South Arran possible MPA, not surprising given the obvious interest of healthy common skate populations to sea anglers. There are also important emotional and well-being benefits associated with the Loch Sunart to Sound of Jura possible MPA, with divers and anglers responding to a questionnaire scoring >4 (out of a maximum score of 5) for engagement, transformative, spiritual and social wellbeing indicator values (Kenter et al 2013)

We note and welcome the fact that removing bottom set-nets and longlines from Loch Sunart to Sound of Jura possible MPA would provide consequential protection for European spiny lobster (Palinurus elephas), itself a MPA search feature (for which suitable MPA sites have not been put forward) and a component of the Reef protected feature in the Firth of Lorn SAC.We would therefore support the inclusion of European Spiny Lobster as a protected feature for this pMPA. 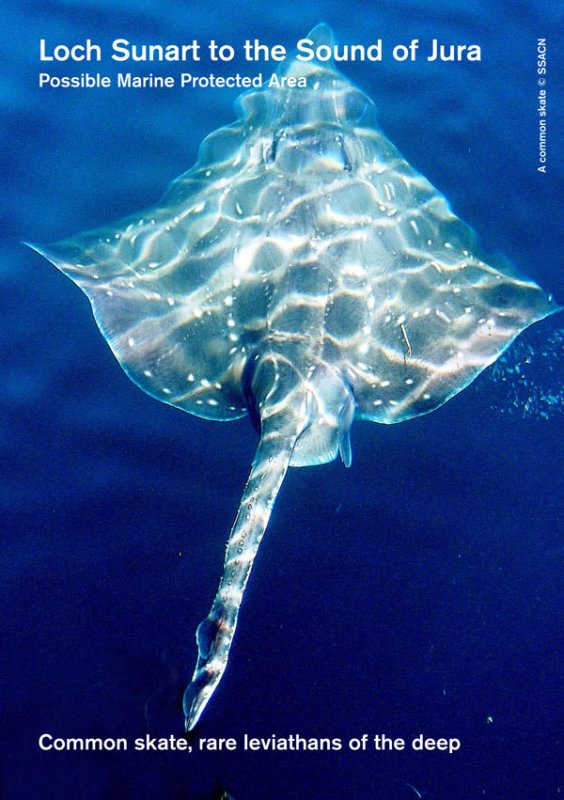 Read our response to the consultation on proposed management measures for this site here:

We do not support approach 2. We fully support the no take zone in Loch Teacuis. However, we do not agree that the management zones proposed in approach 2 are sufficient for the conservation of the common skate and benthic features in this area. Recently published research provides conclusive evidence of the habitat and depth range of resident and transient populations of the flapper skate (a genetically distinct variant of the common skate – see comments in (12)), some occupying a range of 6-205m. This research recommends that ‘Management should consider all depths in the study area, areas beyond the study site, and alternative conservation measures such as technical gear measures for fisheries.

As previously mentioned in the ‘General Comments’ section, we are concerned that cumulative impacts of other activities are not being considered in this consultation, as fisheries management may not be the only cause of impacts to the features and therefore management measures may not be proportionate. In the case of Loch Teacuis, proposed as a No Take Zone, we are aware of moorings and a shellfish farm consent within the loch, which may both have impacts on the
features. We seek clarification as to how these activities have been assessed in relation to fisheries impacts within the loch.

We do not support approach 1. We fully support the no take zone in Loch Teacuis. However, we do not agree that the management zones proposed in approach 1 are sufficient for the conservation of the common skate and benthic features in this area. Of the 60 recorded locations for common skate in maps D2, D3 and D5, fewer than half occur within the no mobile demersal gear zones proposed in Approach 1. This implies that it would protect less than half of the skate population within even the restricted confines of the MPA management zones for approach 1. By no stretch of the imagination could this be considered sufficient. Recently published research provides conclusive evidence of the habitat and depth range of resident and transient populations of the flapper skate (a genetically distinct variant of the common skate – see comments in (12)), some occupying a range of 6-205m. This research recommends that ‘Management should consider all depths in the study area, areas beyond the study site, and alternative conservation measures such as technical gear measures for fisheries’.

We are concerned about the lack of ambition behind the proposed management approaches for the conservation of the common skate. This species has been assessed as ‘Critically endangered’ by the IUCN Red List, and research indicates that their populations are continuing to decline. Common skate have been extirpated from most of the Northeast Atlantic where, as its name indicates, it was once abundant. This MPA potentially represents one of the last strongholds for the common skate in the Northeast Atlantic, possibly even on a global level, and, as the only site within the Scottish MPA network that has been designated for this species, we
contend that measures for its protection should be treated with more urgency and ambition. As such, we are both surprised and disappointed that the conservation objective for the common skate in this site is not ‘recover’. Even with Approach 2, some 30% of the recorded skate locations fall
outside the proposed no-trawling zones. Although there is no longer a major target fishery for the common skate, scientific evidence indicates that mobile demersal fishing gear still poses the greatest threat to their populations, although this is difficult to assess as chondrichthyan (shark, skate, ray and chimaera) bycatch is not always recorded in fisheries data. However, it is generally agreed that the skates’ large body size and wide, flat shape does make it prone to being caught as bycatch in demersal fishing gear, even without the use of tickler chains in the case of trawls. Additionally, their k-selected life history makes population recovery slow, even with an absence of anthropogenic threats.

Recent genetic and taxonomic studies on the common skate indicate that its populations in the Northeast Atlantic are composed of two genetically distinct species. A fundamental issue here is that the proposed management proposals refer only to ‘the common skate’; the Scottish Government must clarify whether these proposals are for one or both of these genetically distinct variant species of the common skate, the flapper skate (Dipturus intermedia) and the blue skate (D. flossada). The list of PMFs must also be updated to clarify any differences in conservation priorities that may apply to the two species. Furthermore, the Scottish Government must make the process by which it has assessed the conservation priority and the conservation objectives for these two species transparent and publicly available. On-going anthropogenic pressure combined with low species resilience and a lack of basic genetic understanding of the common skate makes it very difficult to apply appropriate management measures to these species and we assert that, in light of this, a more precautionary approach is essential to achieve the conservation objectives.

As a mobile species, it is unlikely to be sufficient to protect small deep water ‘hotspots’ where it has been surveyed; research indicates that skate utilise all depths and a range of substrata for various reasons and at various stages of their life history Paragraph 83(b)(iv) of the Marine (Scotland) Act 2010 places a responsibility on public authorities to make management decision based on ‘any ecological…process on which the conservation of any protected feature in a Nature Conservation MPA is (wholly or in part) dependent’. Paragraph 83(10) also states that ‘…”damage” includes the prevention of an improvement’. Given the slow population growth rates of common skate, we contend that at present any amount of bycatch is too much for this species, particularly when considered in the context of its global population decline. In order to provide scope for common
skate to be conserved in this area, and indeed recovered as we believe ought to be the ambition, these factors must be incorporated into any management approaches.

We agree with the management advice for, and fully support the prohibition of mobile demersal gear from, the benthic features of Loch Sunart SAC/MPA, namely reefs, flame shell beds, northern featherstar and serpulid reefs. We suggest that Loch Sunart should have a site-wide prohibition on mobile demersal gear, particularly given the presence of common skate sightings in the proposed area at the mouth in which demersal fishing is permitted.

Furthermore, the proposed no-mobile demersal zones in the Sound of Jura and the Sound of Mull should be much larger and, as common skate are a mobile species and are known to use deep and shallow areas, we question whether there should be a zoned approach at all. We have considered the conservation measures that are already in place in the Firth of Lorn SAC, which overlaps considerably with the Sound of Jura area of this MPA and should have been taken into account when addressing potential management for the site as a whole. Currently there is a ban on scallop dredging within the Firth of Lorn SAC, which forms a large part of the ncMPA, and, as there is a relatively low density of Nephrops trawling (consultation documents Figure D7), we suggest that this prohibition should also include trawling. The very fact that more management measures are being proposed for this area indicates that this prohibition is not sufficient to contribute to the conservation of the common skate and wider health of the area. Crucially, we also note from Figure D8 that there appears to be a relatively high density of scallop dredging in the east side of the Firth of Lorn SAC suggesting possible breaching of the existing regulations, which needs urgently addressed. This, in combination with larger no-demersal gear zones, should ensure that the chance of common skate being caught as bycatch is significantly reduced and is more likely to at least maintain current population levels in this area. Figure 1 illustrates our proposed management
approach for this site, which should be the bare minimum for the conservation of common skate in Loch Sunart to the Sound of Jura MPA/SAC.