The Moray Firth is an inlet in north-east Scotland that supports the only known resident population of bottlenose dolphin Tursiops truncatus in the North Sea. The population is estimated to be around 200 individuals [1]. They are thought to be the largest and most northerly bottlenose dolphins in the world. The dolphins are present all year round, and, while they range widely in the Moray Firth, they appear to favour particular areas [2]. While the population remains stable, it is potentially vulnerable to man-made impacts and environmental change as they are long-lived and reproduce slowly. The dolphins are regularly seen from shore-based locations around the inner Moray Firth (Cromarty), attracting tourists and wildlife enthusiasts to the local area. Bottlenose dolphins are designated for protection within the Moray Firth SAC with a conservation objective to maintain their current (favourable) status. 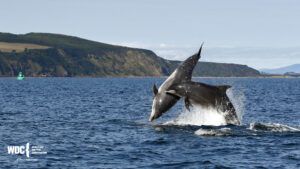 The Moray Firth is also designated for its sandbank features, which consist of sandy sediments that are permanently covered by shallow sea water, typically at depths of less than 20 m below chart datum (but sometimes including channels or other areas greater than 20 m deep). The habitat comprises distinct banks (i.e. elongated, rounded or irregular ‘mound’ shapes) which may arise from horizontal or sloping plains of sandy sediment [3]. Shallow sandy sediments are typically colonised by a burrowing fauna of worms, crustaceans, bivalve molluscs and echinoderms and are often important nursery areas for fish, and feeding grounds for seabirds and sea-duck (e.g. common scoter Melanitta nigra) [3].

This site currently has no fisheries management measures. Public consultation of management proposals is expected in the near future.