To the west of Scotland, adjacent to the boundary with Irish waters, the Barra Fan and Hebrides Terrace Seamount MPA follows the seabed as it descends into the deep Rockall Trough. The ‘Fan’ was created when a large build-up of sediments underwent a series of submarine landslides. They have subsequently been modified by water currents, and were long ago gouged by icebergs grounding on the seabed during past ice ages. [1]

We support the restriction of all demersal fishing gear from the full extent of the seamount. However, we urge that the management boundary for demersal mobile gears be extended from the 800m contour to the 600m contour in line with current scientific advice that suggests damage to vulnerable species exceeds that of commercial return from trawl fisheries below this depth.

Additionally, there are currently no restrictions anywhere around Scotland on the shelf break/slope between 200-400m. We consider the shelf feature itself should be considered as a VME. This depth range may be covered in the offshore Rockall bank sites, but in terms of wider network function and connectivity the two are not equivalent. Across Scotland the 200-400m depth range is heavily trawled and therefore it is important to represent this area within the network and restrict pressure on it within relevant MPAs in order to adequately assess the level of damage and recovery trajectories for habitats and species at this depth. Therefore we urge all representative examples of all continental slope zones in each of the relevant MPAs/SACs are protected from mobile demersal gear. Depending on the steepness of the continental slope, fishing effects may extend 70km horixontally. This finding has huge implications for the buffer of management required around some of the features in these MPAs and therefore we support a precautionary ecosystem approach to management to limit damage to these vulnerable marine ecosystems.

Orange roughy are included on the OSPAR threatened and declining list and ICES considers this species as highly vulnerable, due to life history characteristics such as extreme longevity and late maturity and due to previous exposure to targeted fishing practices. Gillnets are a potential risk to the favourable condition of this species and given vulnerability and marked declines, a precautionary approach would be sensible. We therefore strongly urge a ban on set nets of all types because of the risk they propose to orange roughy as the designated feature, but also for the risk to large cetaceans, sperm whales in particular are known to use this region, and vulnerable deep sea elasmobranches when considering an ecosystem approach. We also recommend that further work is carried out to identify if there are any additional areas of importance for orange roughy and to include these additional examples of the feature within the MPA network, during future reviews to achieve replication and resilience for this species. Additional efforts should be made to monitor this orange roughy as current monitoring programmes are insufficient to monitor the recovery of the species. 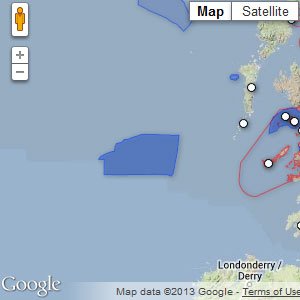 LINK supports the designation of the Barra Fan and Hebrides Terrace Seamount possible Nature Conservation MPA to protect burrowed mud, offshore subtidal sands and gravels, offshore deep-sea muds, an area of the Hebridean continental slope, the Hebrides Terrace Seamount and associated features, including orange roughy and seamount communities and geodiversity features representative of the The Barra Fan and Peaches Slide Complex Key Geodiversity Areas. The boundary and area of the possible MPA is fully supported on the basis of the information provided. It should be noted that the possible MPA lies right on the boundary between the Scottish and Irish marine areas. The Hebrides Terrace Seamount, while mostly in Scottish waters, straddles the boundary.

The seamount rises from the seafloor to a height of 1 km, and supports a diverse range of sea life, including cold-water corals, deep sea sponges, and fish species such as orange roughy. The seamount is thought to be significant to the health of Scotland’s seas due to its effect on movement of underwater currents, which bring food to the area. The resulting rich diversity supports many fish species, which in turn attract larger marine animals, such as sharks and cetaceans.

Management Options:
Management options for protected features of uncertain condition must be evidence-based, account for the known vulnerability of the protected features to human activities and make appropriate use of the precautionary principle.
Although we acknowledge uncertainty in the evidence of the condition of the seamount habitat, the area is likely to be enhanced by restriction of damaging activities by mobile and static gear (e.g. otter trawling,). We also advocate that these activities do impact on PMFs such as burrowed mud, offshore deep sea muds, and offshore subtidal sands and gravels and their constituent species.
We are concerned that no management options are provided for the large-scale biodiversity search features seamounts and continental slope. Seamounts and continental slope are included as a biodiversity features based on the increased primary production and biodiversity, management options to protect this wider biodiversity should be included.

There is limited attention in the management options document concerning pelagic trawling and purse seining activity, and as such no informed assessment can be made regarding sustainable harvesting of associated pelagic and demersal fish species. We further support and encourage designation that prohibits all forms of future disturbance by mining and exploration, and new oil and gas facilities, particularly with respect to Scotland’s vision for a full shift to sustainable electricity production and reduction in carbon footprint.

Limiting these activities will to ensure the Barra Fan & Hebridean Terrace Seamount communities are fully protected from disturbance in perpetuity, and have opportunity for future enhancement. For any proposed licensed activities, they must be managed through a stringent consenting process, as directed by the Marine and Coastal Access Act and Marine (Scotland) Act. However, we emphasise that the expansion of licence activities in possible MPAs should be avoided if alternative sites can be located.

It is important that management of this possible MPA takes account of its position on the Scottish/Irish waters boundary. Every effort should be made to make sure that management of activities, particularly over the seamount, are consistent across the boundary.

Socioeconomic Assessment:
The socioeconomic impact data in the BRIA report indicates the relatively modest, worst case, costs of designation for commercial fisheries as £0.3 – £0.4 million pa. As indicated in the comments under Management Options Report, it is difficult to make informed comment on the contribution of the Barra Fan & Hebrides Terrace Seamount possible MPA to pelagic and demersal fish stocks, and associated fishing activity options. Relatively modest displacement costs associated with fisheries with habitat damaging activities that employ bottom mobile gear will be outweighed by the medium to long term benefit of protecting the ecological integrity of the possible MPA so it can continue to provide ecosystem services to Scotland’s offshore waters. The BRIA report indicates expected costs of undertaking stringent environmental impact assessment procedures for oil and gas sector proposals may range from £1.6 – £5.8 million. We argue that these projected costs would be absorbed by the economic value and wealth of this industry, with likely alternative sites and opportunities being accessible in the short to medium term.

Representative seamount habitat ecosystems are essential for Scotland’s MPA network due to their biological diversity and important ecosystem drivers. Seamount ecosystems are relatively uncommon worldwide. There are concerns with the negative impact of fishing on seamount ecosystems, with well-documented cases of stock decline, for example orange roughy decline due to overfishing in the vicinity of seamounts off Tasmania. Ecological damage is mainly caused by bottom trawling, and large demersal netting which exploit populations of fish that exhibit mass aggregation behaviour in the vicinity of seamount seascapes.
Sperm whales are known to use this region and should be considered in the management options. 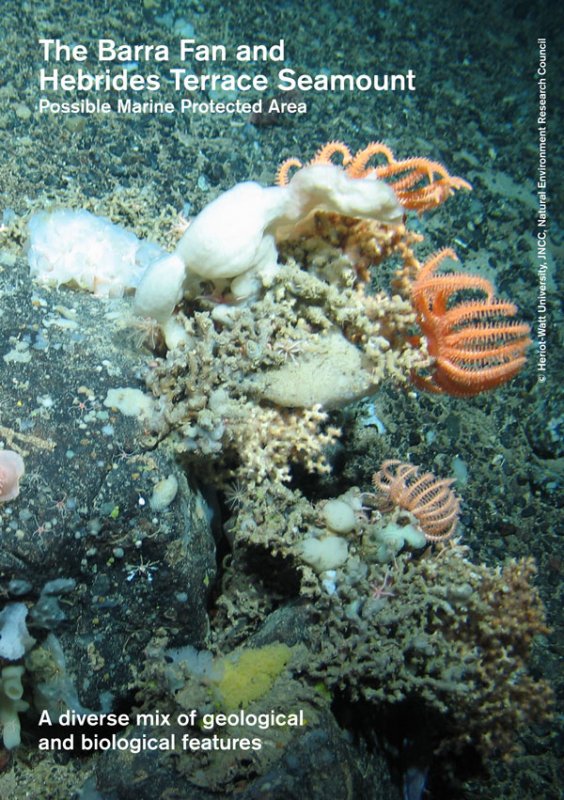 Check out the official documents relating to the The Barra Fan and Hebrides Terrace Seamount MPA on the Joint Nature Conservation Council website.