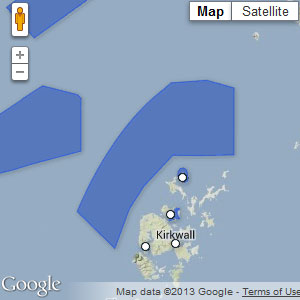 Lying to the north and west of Orkney, this MPA has been designated as an area of importance for sandeels, a fish that burrows into the sand to escape from predators. They are a key source of food for a range of marine wildlife, including many types of larger fish and seabirds, such as puffins. Fishing for sandeels has occurred in many coastal and offshore areas around Scotland in the past but is now limited to occasional fishing off the east coast of Scotland. [1]

Save Scottish Seas campaign members have assessed the Scottish Government’s MPA proposal for this site as part of its consultation response.LINK supports the designation of the North-west Orkney possible Nature Conservation MPA for the protection of newly emergent sandeel larvae and a range of geological features formed by the action of tides and currents, including sand banks, sand wave fields and sediment wave fields. The JNCC advice has already indicated that the area holds one of the largest sandeel spawning grounds in Scottish waters, and Proctor et al (1998) show that many of the spawning fish are swept into the wider North Sea where they contribute to the ecosystem function and to the prey available to foraging seabirds. The JNCC advice states that “No other possible MPAs for which sandeels are being considered are thought to be of equal ecological value”, deciding to not designate this site would contradict this advice and the Scottish Government’s Marine Protected Areas and Sandeels position paper .

The conservation objective for the sandeel feature should be set to recover. No strategic sandeel monitoring has taken place in the area and consequently the status of the species is not known. As a result, the conservation objective for the site has been set as ‘conserve (feature condition uncertain)’. However, we suggest that seabird breeding success has been so poor that the sandeels – a prey species many species are particularly well adapted to predating – must be in poor condition. In the past 10 years kittiwake productivity has only once been above 50%, and has not reached this level at all for common guillemot and northern fulmar. Last year, of 325 surveyed kittiwake nests, only a single chick was fledged. This would not be the case if prey availability was good, and prey availability is acknowledged as the issue in SNH’s latest trend report .

The overall trend cannot be the product of a phenological mismatch (seabird breeding dates have varied throughout this 10 year window) so we infer that the sandeels in this site are in poor condition – potentially undersize as has been found in other parts of the North Sea (Wanless et al., 2004 ; Frederiksen et al, 2011 ). Because this site provides benefits to much of the North Sea, the conservation objective of this feature should be set to recover to ensure the benefits this site provides to the wider seas are restored.

Since the health of the sandeel population also relies upon the status of the sedimentary habitat in which they shelter, ‘offshore subtidal sands and gravels’ should also be added as a protected feature to this pMPA and the impact of towed/active gear on the seabed considered.

Management Options:
LINK supports the statement made by Marine Scotland Science and SNH that a targeted sandeel fishery should not be permitted within the possible MPA.
The proposal currently suggests no additional management. This will mean that the site’s designation will not have any impact, good or bad, on the health of the feature or the wider marine environment. This contradicts the ambition set out in the introduction to the Management Option Paper which states “The development of appropriate management will ensure the North-west Orkney possible MPA makes a genuine and long-lasting contribution to the protection of Scotland’s marine environment” and also the duty in the Marine Act to protect and where appropriate enhance the health of the marine environment.

Socioeconomic Assessment:
Tourism is an important sector of Orkney’s economy. In 2000, 81,000 summer visitors were estimated to bring tourism revenues of £18 million to the islands. RSPB Scotland estimated that £1.3 million of this spending could be attributed to Orkney’s birds and wildlife, supporting 36 FTE jobs on the islands (Rayment and Dickie, 2001 ). Orkney received an estimated 141,172 visitors in 2009 (the most recent figures available). The future of the tourism industry depends on the protection and management of Orkney’s outstanding natural and historic environment, including the conservation of the marine – the Mull Head kittiwake colony no longer exists .
A decrease in sandeel spawning stock biomass induces a higher cannibalism for cod and whiting, leading in turn to a decrease in spawning stock biomass and yield for those predator species. This should be considered as part of the environmental baseline and a switch away from cannibalism should be considered as a benefit of designating this site.
The potential value of the North-west Orkney possible MPA to divers and sea anglers has been estimated at £4.0 to £8.6 million based on willingness-to-pay measures (Kenter et al., 2013) . Kenter et al. also found important emotional and well-being benefits associated with the North-west Orkney possible MPA, with divers and anglers responding to questionnaire scoring >4 (out of a maximum score of 5) for engagement, therapeutic, spiritual, transformative and social wellbeing indicator values.

Strategic Environmental Assessment:
Spawning sandeels originating at this site are spread into the North Sea and the Moray Firth where some will become prey for a number of other species. Those that settle will provide their own spawn to settle and provide prey to species further ‘downstream’. This site therefore has massive importance for the north sea ecosystem.

There are a number of national and international designations for seabirds along the Orkney coast which would benefit from the conservation of this site. Marwick Head, an RSPB reserve, is one example designated as an SSSI for seabirds.

Check out the official documents relating to the North-west Orkney MPA on the Joint Nature Conservation Committee website. 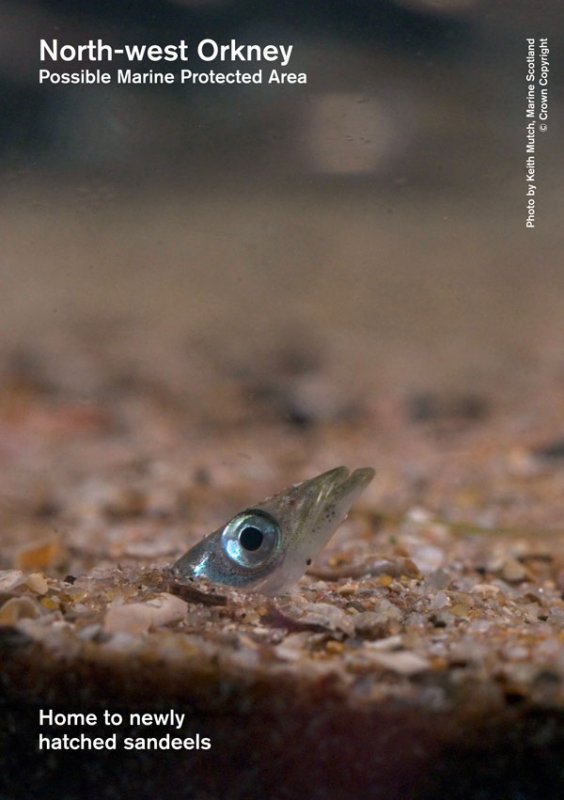