Today we celebrate World Wetlands Day! Scotland has many amazing wetlands that are not only sites of important biodiversity but also provide a unique home to a wide variety of wildlife. Wetlands provide many of the things which society relies upon such as clean water, flood protection, carbon storage, and are also great places for people to enjoy the outdoors.

World Wetlands Day marks the date of the adoption of the Convention of Wetlands, known as the Ramsar Convention, which was signed in 1971. The Convention’s mission is to conserve wetlands through local and national actions as a contribution towards achieving sustainable development and protecting biodiverse habitats.

We asked seven LINK members to tell us more about the importance of the wetland habitats and related species that they host as part of the Nature Champion initiative. 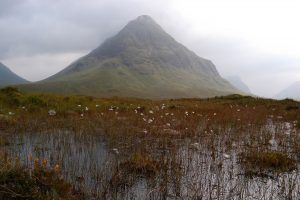 Hosted by National Trust for Scotland and Amphibian and Reptile Conservation

Scotland has a range of habitats, a mosaic of fantastic variety. Nestled within the grand and awe-inspiring mountain ranges, sweeping moors and tumbling waterfalls, are fragments of upland flushes, fens and swamps.

The upland flushes of our hills appear as long green lines of rushes or bright patches of mosses and liverworts. These green darts follow the springs, here you will find the heath spotted orchid, dwarf cudweed and butterwort. The flushes provide a home for a variety of invertebrate life, providing good hunting for common lizards and toads. These flushes are under threat from draining hillsides, ploughing for forestry or by cutting moor-grips.

Fens lack trees but these peaty wetlands are fed by a steady source of ground or surface water. They are home to a variety of plants and animals including the red jewelled sundews. Fen vegetation is variable but very distinctive and contains many species that are rare or scarce.

Swamps are largely undisturbed wildernesses, a tangle of woody species and shade tolerant plants. They add a sudden softness to the landscape in areas of moor and if they tempt in the unwary walker, their feet will get a soaking from the sodden ground.

Small Freshwater Bodies include ponds, ditches, springs and flushes. All of these provide huge ecological benefits, supporting a wide range of aquatic species and offset some of the negative impacts of many environmental issues facing us such as climate change, flooding and noise pollution.

Ponds support an extraordinary two thirds of all freshwater species and are central to the survival of many including frogs, toads, newts, a huge range of aquatic invertebrates and plants.  Freshwater Bodies also provide mammals and birds with drinking water and some species such as grass snakes with important foraging areas.

One third of ponds are thought to have disappeared in the last fifty years or so and of those that remain more than 80% are in ‘poor’ or ‘very poor’ condition (Freshwater Trust Habitat research).  This has had an enormous impact on aquatic wildlife.

Creating clean new ponds is one of the simplest and most effective ways to protect freshwater wildlife. Where it is not a viable option to create new ponds, restoring existing depleting ponds is greatly beneficial.

Emma Harper MSP is Nature Champion for Ponds and Small Lochs and Natterjack Toad. Ms Harper has previously contributed to a debate on World Wetlands Day in 2020. She underlined the importance of protecting wetlands both to support biodiversity and to provide a habitat for endangered species such as the natterjack toad to avoid extinction. 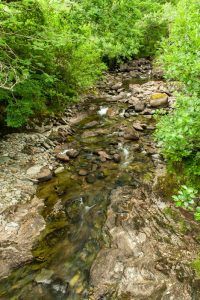 The woodlands that follow the river and loch’s edge have always held an aura of magic in Scotland, considered by Celts to join our world to those more mystical. They continue to be places of natural connection and are vitally important for many reasons, both for people and wildlife. As with any woodland, riparian woodland is a carbon store and benefits biodiversity, acting as a wildlife corridor. More uniquely, the trees shading the river help keep the water cool, making habitat better suited for spawning fish, like Atlantic salmon, and freshwater pearl mussels. The trees present a barrier to run off pollution from farmland and roads, helping to keep the water clean and their roots stabilise the riverbank, reducing erosion. In high rainfall riparian woodland reduces the risk and severity of flooding, providing protection to people’s homes and businesses.

Historically riparian woodland would have run alongside most of Scotland’s rivers, but now many areas are devoid of trees due to human impacts. For the benefits of riparian woodland to be maximised we need to restore this habitat, allowing trees to grow by protecting them from browsing and grazing animals and encouraging landowners to plant native trees in these areas. 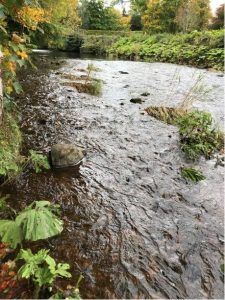 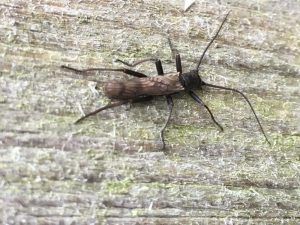 Rivers in Scotland are home to a great diversity of species, including plants, invertebrates, fish, birds and mammals. Rivers channels themselves provide a diversity of habitats that provide homes for an equally diverse array of species that are perfectly adapted to survive in the specific conditions provided by these unique habitat types. River habitat itself does not just include the channel itself but also the surrounding embankment flood plains and riparian habitats which are not only vital for different life stages of the species that inhabit our rivers but also act as a buffer against pollution and the impacts of climate change.

Each river in Scotland is home to some very special species. Every February Buglife launches its citizen science project the hunt for the Northern February Red stonefly.  The Northern February red stonefly (Brachyptera putata) has its global stronghold in the Scottish Highlands and has only ever been recorded in two rivers outside Scotland – the River Usk in Wales and the River Wye in Hereford, where it is now thought to be extinct. During periods of winter sunshine through February and March these insects can often be found basking on fence posts that run alongside large rivers, from where the adults will have emerged to mate and disperse after spending their formative months as larvae growing under rocks in fast flowing water. The female has three dark bands across its wings, as well as dark wing tips, whilst the male is short-winged and unable to fly. 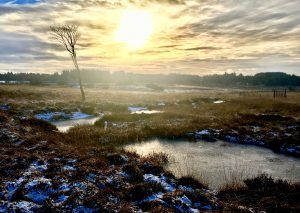 Lowland raised bogs are a peatland habitat created as raised domes of peat on wet impermeable substrate, such as clay. They are formed by Sphagnum mosses and are home to a host of specialist species and often rare biodiversity. Unfortunately, we have lost over 85% of our lowland raised bogs due to several factors such as peat extraction, afforestation and drainage. These special habitats are still found in the heart of the central belt in areas like the Slamannan Plateau in Falkirk. Raised bogs are important as they store massive amounts of carbon and water, providing a carbon sink and flood management when in a good condition. 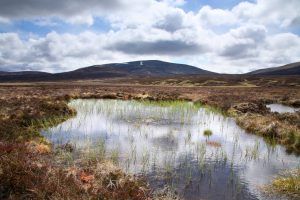 Standing on a blanket bog in Scotland, looking out over the gently undulating moss hummocks and pools, you could be standing on peat more than 8 metres deep, that has formed over thousands of years and represents a globally rare habitat. Here in Scotland, blanket bogs cover around 1.8 million hectares, equating to 23% of our land area. Over 1.6 billion tonnes of carbon are stored in Scottish peatlands –a third of the carbon held in the Amazon rainforest which is 250 times larger in area! However, only around 20% of UK peatlands are in a natural, or semi-natural state due to human interventions and so are not only less effective in storing carbon, but actively release it.

Blanket bogs are also incredibly important for biodiversity and downstream flood management as they store vast amounts of water.

Large-scale restoration is underway, but it requires further investment and co-ordinated action at a regional and national scale. Peatland degradation must be halted by banning peat-based compost sales in Scotland, while promoting alternative composts and ensuring that peatlands are protected from inappropriately planned activities such as burning that does not follow the Muirburn Code, tree planting, wind farms and other developments.

As we can see, wetlands come in all shapes and sizes and there is a great variety throughout Scotland. Each support a wealth of wildlife which all have an important part to play in keeping our ecosystems healthy and balanced. At the start of this Decade for Ecosystem Restoration, now is the time for Nature’s voice in the Scottish Parliament to be strong, loud and well informed to protect important habitats like Scotland’s wetlands and the species that they support. Nearly 60 MSPs have signed up to be champions for a range of habitats and wildlife. Find out more information here.